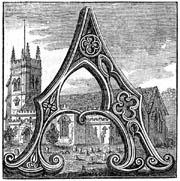 The main parts of the Nave and Transepts of the church date back to the 13th century in Early English style. It was added to in the 14th and 15th centuries when a tower was also built. More recently the Drake Memorial Chapel, which contains some of the finest examples of the monumental masons' art in the county, was built in the 18th century. The Vestry and South Chapel were added in the 19th century to complete the church much as it stands today.

Although the river Misbourne, by whose banks the church stands, is now nothing more than an occasional trickle due to predatory water extraction from Chiltern boreholes, in mediaeval times it had a more substantial flow and supported at least 3 mills. Archaeological evidence shows that the floor of St. Mary's has had to be raised on several occasions, presumably to bring it above the level of the Misbourne and reduce flooding.

The exterior is starkly Victorian following its restoration by Preedy in 1870-1872, when much of it was faced with local flints. A plaque on the outside of the tower recalls that this was also rebuilt with finance from Thomas Tyrwhitt-Drake in 1888. Preedy rebuilt the chancel arch inside the church, which stayed in this form until Sebastian Comper was let loose on it in the 1960s. Pevsner did not appreciate his work and describes the interior rather harshly as having the atmosphere of a railway station waiting room. This was not helped in more recent times when the rector decided to remove all the pews with the result that visitors are faced with serried ranks of anonymous chairs. This does however make St. Mary's a suitable venue for orchestral concerts which are held there annually in the Amersham Festival of Music.

The churchyard has been largely cleared of monuments, and those that remain are mostly illegible. The Drake Chapel (normally locked, with key available from the Rectory) contains memorials to the Tothill, Drake and Tyrwhitt-Drake family stretching back from modern times unbroken to the 16th century. Some of the memorials from the period when the Drakes were estimated to be amongst the wealthiest commoners in the land, are outstanding examples of monumental sculpture from the best artists of their day. For shere pathos however, the memorial to young John Drake who died in 1623 takes some beating

Had hee liv'd to bee a man
This inch had grown but to a span.
Nowe is hee past all feare of paine,
'Twere sin to wish him heere againe.
Vewe but the way by wch we come,
Thow't say hee's best thats first at home.

Many of the memorials inside the church have been moved from their original positions and those in which they are described in earlier histories, however the visitor is struck with the fact that the Drakes and Tyrwhitt-Drakes seem to have a monopoly on memorial windows, brass plaques and sculpted memorials.

The East window is a fine example of 17th century Flemish glass, but is not original to Amersham. It was moved from the church at Lamer (nr. Wheathampsted, Herts) in 1761 by agreement between the Drakes and their Garrard cousins there.

To the East of the churchyard is the Memorial garden with a list of the names of the men of Amersham who gave their lives in the First World War.

Details of the stained glass in the church can be found on the following web sites (the site includes many photos):