[Extract from Belle Assembleé: May 1845, London Published at The Office, 24 Norfolk Street, Strand.]

THE foundations of Ely Cathedral were laid by abbot Simeon, who erected only the old choir and transept, the latter of which now only remains. The nave was finished in 1174; the great western tower in 1189. The Galilee, or western portico, by which the church is entered, was finished in 1215: it is generally allowed to have been the work of bishop Eustachius, and affording a very early and perfect example of the early English style. Various successive additions were made, all tending to add to the grandeur of the structure, which differs from other cathedrals in the great length of the nave and shortness of the transepts. In 1650 the cloisters were taken down. The great spire was ordered to be removed in 1748, from the top of the great western tower, against the will of the inhabitants, who petitioned that it should remain, which was granted, though ultimately it was taken down. The choir was removed into the presbytery in 1770.

The first part to which the attention is turned is the Galilee, the work of bishop Eustachius, where the penitents used to wait for re-admission into the church. This was repaired and restored in 1802. From thence the nave is entered immediately under the great tower. The magnificence of the building here bursts upon the sight. The tower is of Norman character in the lower stages, and early English in the upper. In 1802, the old belfry floor was removed, and the magnificent arch by which the tower communicates with the nave then became visible.

The nave consists of twelve arches, somewhat more than semicircular; above these is another row about half the height; in the third row there are three arches in each compartment. The side aisles are worthy of notice.

From the intersection of the nave and transepts rises the octagonal lantern, a beautiful work. From it a flood of light is poured into the cathedral. The original square tower fell in 1322, throwing down the first three arches of the original choir. The stone-work of the octagon was immediately commenced, and was finished in six years. Here the choir was, and here it was again restored. 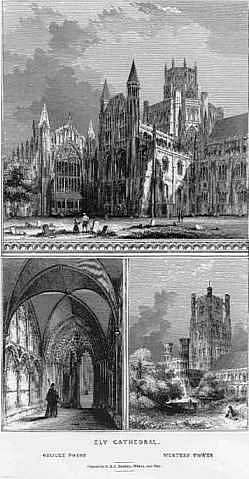 The original choir extended only to three arches, the work of bishop Hotham. The choir, originally the presbytery, was solemnly dedicated in 1252, Henry III., with his court, being present. The entrance is through a screen, which is an arcade of three pointed arches supported on slender columns; above, is the organ. The choir is in the style denominated early English; it is very richly ornamented. The east end is exceedingly beautiful; it was found to be two feet out of the perpendicular, but was restored to its proper position by Mr. Essex, by means of screws, in 1768. The stalls are beautiful specimens of carving. The altar-screen is modern. The bishop has no throne in the choir, but sits in the right-hand stall at the entrance: the last abbot becoming the first bishop, still retained his seat; while the last prior becoming the first dean, sat on the left. The presbytery once contained many monuments of bishops, priors, and deans, all removed except two. At the east end are two chapels bishop Alcock's, wherein is his monument; on the north, bishop West's. These are decorated with a profusion of architectural embellishments. The windows were once filled with glass, destroyed by the puritans. There are three rows of windows at the east end. The lowest has three lancet-headed windows of one light each; the middle five of one light each, the centre one being higher than the two next to it; and these higher than the others, of three lancets. The third story, which admits light between the roofs, are in the gable itself.

The Lady chapel, which is parallel with the choir, adjoins the eastern angle of the northern transept.' It is an elegant building. The groining of the roof, and the series of niches surrounding the interior, are of exquisite beauty; it is now fitted up for the use of the inhabitants of Trinity parish. In the southern transepts are the vestries, libraries, &c. Of the cloisters and chapter-house, few vestiges remain. The refectory has been turned into the deanery. A little to the south of the cloister stood the chapter-house, of which only just enough remains to shew that it was a building coeval with the oldest part of the present cathedral. The cathedral, as a whole, presents a most beautiful and noble specimen of architecture. Had the northern wing of the great tower remained, the western front would have been magnificent.

The dimensions of the cathedral are as follows:-

This page is copyright. Do not copy any part of this page or website other than for personal use or as given in the conditions of use.
Web-page generated by "DB2html" data-base extraction software ©Colin Hinson 2017