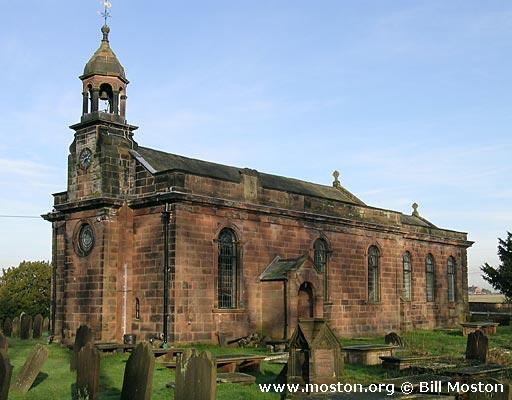 A ancient chapelry in the parish of Runcorn: All Saints. In 1861 it became the district church for the townships of Aston by Sutton, Aston Grange, Sutton, and part of Dutton township (all previously served by Runcorn: All Saints). The boundaries of "The District Chapelry of Aston" were described in the London Gazette on 3 May 1861:

"All those parts of the parish of Runcorn, in the county and diocese of Chester, which are comprised within the several townships of Sutton, Aston-by-Sutton, and Aston Grange, and within that portion of the township of Dutton which is situate within the said parish of Runcorn. And also all that place or territory in the same county and diocese which is known as Middleton Grange, and which was formerly extra-parochial, but was under the provisions of the Act of the twentieth year of Her present Majesty, chapter nineteen, intitled "An Act to provide for the relief of the poor in extra-parochial places," annexed to the township of Aston-by-Sutton aforesaid, by an order of Justices of the Peace assembled at the General Quarter Sessions, holden at Knutsford Nether, in and for the county of Chester, on the fifth day of April, in the year one thousand eight hundred and fifty-eight."