A William Atyard was resident of Yard Farm in the parish of Marlborough in the late 12th Century. A descendant, Roger Yarde, married Elizonta Bussel, and through her the family inherited Bradley manor, near Newton Abbot. Perhaps the best known and wealthiest Yarde was Richard (1335-1467), High Sheriff of Devon in 1442. The Bradley estate passed to Thomas Yarde in 1543. His brother, John, and his descendants moved first to Clyst Honiton, and subsequently the Staple Fitzpaine and Curland areas in Somerset. The article, from a copy of a rare and much sought-after journal can be downloaded from the Internet Archive. Google has sponsored the digitisation of books from several libraries. These books, on which copyright has expired, are available for free educational and research use, both as individual books and as full collections to aid researchers. 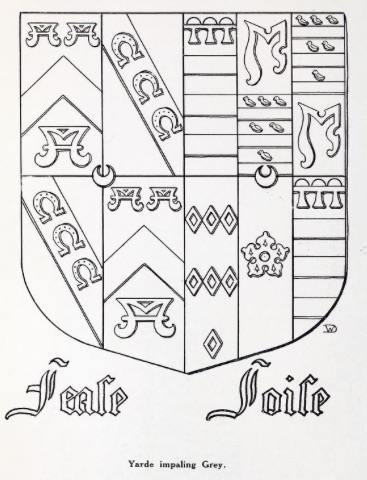 Note 64. YARDE HERALDRY AT HONITON CLIST. - The interesting shield carved in high relief on the tomb in the north aisle of Honiton Clist Church bears the arms of John Yarde of Treasurersbeere (Tresbeare) impaled with those of his wife Joyce, a second daughter of the house of Grey of Groby, Leicestershire. The colours have perished from the face of the shield, but a careful examination revealed the original red, black, blue and gold adhering to the interstices of the stone. The YARDE arms, arg. a chevron gu. between 3 waterbougets sa., are quartered with those of FERRERS of Devon, or, on a bend sa. 3 horse shoes arg., an ancestor, Richard Yarde, having married Joan, heiress of Ferrers of Churston Ferrers. The wife's impalement bears several quarterings, representing some of the more important matrimonial alliances of her family. Quarterly of 5, 1st, GREY, arg., 3 bars azure* in chief 3 torteaux, a label of 3 points gu. 2nd quarterly, 1st and 4th, HASTINGS, or, a maunch gu.; 2nd and 3rd, DE VALENCE, barry arg. and az., an orle of martlets gu. Roger, 1st Baron de Grey (d. 1352), married Elizabeth Hastings, heiress of John, Lord Hastings of Bergavenny and his wife, Isabel de Valence, co-heiress of the Earl of Pembroke. The second Baron de Grey was afterwards involved in a "great contest in Court of Chivalry" with Sir Edward de Hastings touching the right to bear these quarterings, with the result that the arms, together with the Hastings title, were adjudged to Lord Grey and his heirs. There is a fine example of this quartered shield in contemporary stained glass at Gloucester Cathedral. 3rd, FERRERS OF GROBY, gu., 7 mascles or, 3, 3, and 1. Sir Edward Grey, 4th Baron, who married Elizabeth, heiress of Henry, Lord Ferrers of Groby, became jure uxoris Lord Ferrers and Lord Grey of Groby. 4th, ASTLEY, azure, a cinquefoil erm. The second wife of Reginald, 3rd Baron de Grey, was Joan, heiress of Lord Astley. The 3rd Baron died in 1440. From his first wife Margaret, daughter of Lord Roos, descended the Lords Grey de Ruthyn, Earls of Kent. 5th, GREY, as No. 1.

The deeply incised inscription on the tomb, which reads:

Here lieth John Yarde Esquire who ended his life tbe third of May and [blank] his wife, 1575,

was evidently recut at a comparatively recent date, when the mason in his perplexity must have made a guess at the final name, the result of his efforts being shown in the first word in the appended drawing. The original word was evidently Joise, but a few careless cuts of the chisel were sufficient to obtain the strange sequence of letters now existing.

In a letter to Richard Sainthill, dated Nov. 29, 1836, Mr. Bagnell, then curate at Honiton Clist, wrote: - "... as you seem to take an interest in the subject I send you the monumental inscription of John Yarde of Traiesbeare, the Christian name of his wife is illegible, but the traces do not much resemble that of Elizabeth . . . ."

John Yarde's daughter Elizabeth having married Edward Sainthill, of Rockbeare, may account for Mr. Sainthill's interest in the tomb. It is possible that about this time the mason was called in to assist at unravelling the "mystery." In 1888 the late Charles Worthy examined the heraldry, and ascribed the quarterings of the Grey impalement to 1st and 5th, WOLACOMBE; 2nd, quarterly, MOHUN and ROSKYMER; 3rd, an unusual coat of GIFFORD; and 4th, BRADMORE (Bailiff of Exon, 1520).

There is a reference to John Yarde in Professor Harte's transcription of the Hoker MSS. account of the rising of 1549, when, it seems, he led the advance against the insurgents during the skirmish at Gist Bridge. The troops were commanded on this occasion by William, Lord Grey de Wilton, who was descended from an uncle of the Roger de Grey mentioned at the beginning of these notes.

John Yarde was the second son of Richard Yarde, of Bradley, and his wife Margaret Bamfylde, of Poltimore. His son, Francis Yarde, of Tresbeare, married Frances St. Barbe, of Ashington, Somerset, and it is to their eldest son Edward, who died s.p. 1634, that the mural monument above the tomb is dedicated. He married Bridget Radford, whose arms (sable, 3 lampagoes cowardis argent) are shown both in full shield and impaled with those of her husband. The Yarde arms, in colours, surmount this monument, which bears the following inscription, deciphered by Mr. Bagnell in 1836, but now well nigh illegible: -

In obitum Edwardi Yarde. Ar:
Whoever wantes a rule his liffe to scan
Under's the mete Yarde of an honest man
Much time he spent in heavenly contemplations
In sacred studyes, prayres and meditations
The saintes society he did most dearly love
Their hoast with God, he in himself did prove
He tooke the Churche's case to hart, he grieved
At God's dishonour: he the poor relieved:
He Abram-like instructed oft his own
And Moses-like, a peaceful man was known
Harmeles and prideles, careless of earthe's pelfe
A friend to learning, courtesy itselfe.