Above the pair of arches behind the Cathedral’s high altar soars a splendid display of stained glass, the Great East Window. Much of this glass, including the nineteen figures, is medieval. Nine of the figures date from 1304. Three of them are located at the top of the window. They still have their original faces and, from the lettering on their scrolls, are identified as Abraham, Moses and Isaiah. The six outer figures of the bottom row are also from 1304, but the faces of these saints are not original. By 1390, the stonework of the original window had become unsafe. A new window was constructed in the perpendicular style and the tracery of this window remains today. Original glass was included with new glass when the new window was glazed in 1391. The window also contains many coats of arms of bishops, royalty and prominent families, some of which date from 1391. The medieval glass from this window was among the precious items removed from the Cathedral and stored safely during World War II. Almost all of the glass remaining in the Cathedral was damaged beyond repair during the bombing of Exeter in 1942. The article, from a copy of a rare and much sought-after journal can be downloaded from the Internet Archive. Google has sponsored the digitisation of books from several libraries. These books, on which copyright has expired, are available for free educational and research use, both as individual books and as full collections to aid researchers. 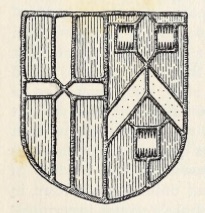 Note 194. THE HERALDRY AND ANCIENT STAINED GLASS IN THE GREAT EAST WINDOW OF EXETER CATHEDRAL (III., p. 1, par. 1). - In his interesting article on the heraldic stained glass in the east window of Exeter Cathedral, Vol. III., pp. 1-8, the late Mr. Roscoe Gibbs mentioned a coat of arms which, discovered in the crypt beneath the Chapel of St. James, eventually found a resting place in the east window of the Chapter House. As far as the writer is aware, the shield {gules a cross argent impaling gules a chevron or between three combs argent) has not been hitherto identified, in which case these short notes may be of interest. The arms are those of the Abbey of St. John of Jerusalem in England impaled with those of the Grand Prior Botell. The Secretary of the Order at St. John's Gate, Clerkenwell, E.C., to whom the writer is indebted for the following in- formation, considers this little shield an especially interesting one, the impaled form being unusual. The shield of Grand Prior Botell, still in the east window of the Priory Church at Clerkenwell, has the arms of the Order in chief, whilst it was the custom of the Grand Masters to quarter the arms of the Order with their own. Botell, who was Grand Prior for England from 1439 to 1469, was at one time Pre- ceptor of Trebyghen, in Cornwall, which may account for the presence of his arms in Exeter Cathedral.