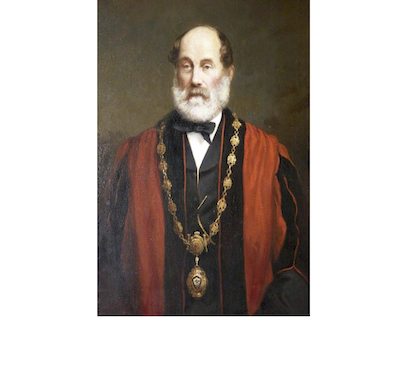 The obituary was read at the Association’s August 1900 Totnes meeting. Mr Chapple, a leather dresser by trade, is best remembered for his service to the people of Great Torrington as Alderman and thrice Mayor (1871, 79 and 99). A handsome portrait of Alderman Chapple in his civic robes, is preserved in Torrington Town Hall. The obituary, from a copy of a rare and much sought-after journal can be downloaded from the Internet Archive. Google has sponsored the digitisation of books from several libraries. These books, on which copyright has expired, are available for free educational and research use, both as individual books and as full collections to aid researchers.

Nathaniel Chapple was born at Great Torrington in 1822, and on the death of his father in 1847 succeeded to his father's business of a leather-dresser.

He was a strong Liberal in politics, and in 1861 was elected a member of the Town Council of Great Torrington; from 1872 to his death was an Alderman in that body, and served the office of Mayor in 1871, 1879, and 1899. He was also a leading member of most of the other public bodies in the town.

Though unswerving in his opinions, he was, on account of his fairness to those who differed from him and his general uprightness of character, universally respected as well by his friends as his opponents.