Printed and published by Thomas Cory Burrow, Hartland, N. Devon,
in association with the year end edition of the Hartland and West Country Chronicle.

One of the most frequent contributors to the Hartland Chronicle was Richard Pearse Chope who, almost every issue, produced one of his "Notes of the Past," detailing local customs, history which later formed the basis of his book "The Book of Hartland."

Sadly, he never saw publication of "The Book of Hartland." It was published in 1940, shortly after his death and has since been reprinted, in facsimile. As well as much historic information on Hartland, the book contains a 16-page bibliography listing and detailing his writings. These contain the many "Notes of the Past" published in H&WCC as well as contributions to D&C N&Q and to the Transactions of the Devonshire Association. He died on the 8th February 1938 in his 76th year at his beloved home in Hartland, "Fosfelle." 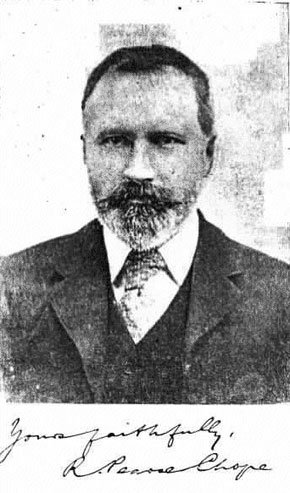 No apology is needed for presenting to our readers the portrait of the author of the interesting series of "Notes of the Past", which have formed and important feature of the Chronicle during the last five years. Mr. Pearse Chope is the eldest son of the late Mr. Thomas Chope, yeoman, of Farford. He was taught the rudiments of education by Mrs. Bright and the late Mr. William Heard, and, after a short course at the Academy, Lapford, he was transferred to the Devon County School, where he had a long and distinguished career. At the age of 15 he became head boy of the school, and at the following Cambridge Local Examination he was first of all examined in England (2885 in number) and won the University prize. In 1881 he entered Trinity College, Cambridge, where he was awarded a Major Scholarship. In 1884 he obtained First Class Honours in the Mathematical Tripos, and graduated as a B.A. Shortly afterwards he was selected by competitive examination as an Assistant Examiner in the Patent Office. Early in the present year he was appointed a Deputy Examiner, and he has since been promoted to the important post of Principal of the Abridgments and Printing Branch of the Office.

The number of publications issued under Mr. Chope's editorship and supervision is enormous. In addition to a yearly issue of about 14,000 specifications or full descriptions of the inventions patented, mostly illustrated with large photolithographic drawings, he publishes about 150 volumes of illustrated abridgments or brief descriptions of the inventions arranged in classes according to their subjects, as well as an Illustrated Journal weekly, and numerous indexes and occasional works. In spite of the arduous nature of his official duties, he finds time to devote to other literary work. In 1891 he wrote an account of "The Dialect of Hartland" for the English Dialect Society, and he has since assisted the Professor of Comparative Philology at Oxford in his gigantic undertaking - the English Dialect Dictionary. "The Story of Hartland", published by us last year, was so successful that the bulk of a large edition was sold in a few weeks. In the same year he read a paper on "The early History of the Manor of Hartland" before the Devonshire Association at Bideford. He also contributed several valuable notes to "Devon Notes and Queries" and other periodicals, and this year he wrote some interesting appendices to a new edition of Hawker's "Footprints of Former Men in Far Cornwall". His latest and most important work, performed in conjunction with others, consists of a transcript, with extensions and an introductory essay of the "The Pipe Roll of the Bishopric of Winchester, A.D. 1208-9", published for the London School of Economics (University of London) under the editorship of Hubert Hall, Esq., of the Public Record Office, lecturer in Palaeography and Diplomatic, and Directory of the Royal Historical Society.