This Pew List document was commenced in 1650, and recorded the agreed seating positions for all parishioners who paid pew rent. The document was written by various clerks in different inks and handwriting, but this transcript has tried to extract as much information as possible. 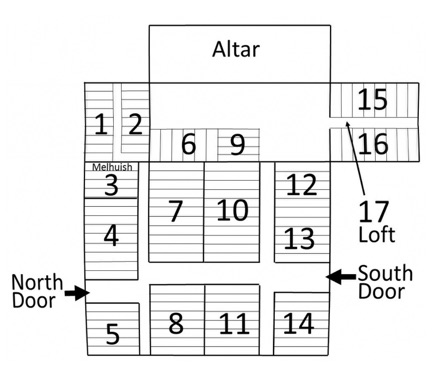 Mens seats on the north side of the new church

Women's seates on the north side

Womens seats adjoining on the north side of the pillers

Womens seates on the south side of the pillers

Womens seats below the Allye

Mens seats on the souther side of the church

Womens seates on the south side of the church

Mens seats ~?~ on the wester side of the yeele under the loaft

In the thaurt seate by the wale in the said loaft