This Pew List document was commenced in 1732, and recorded the agreed seating positions for all parishioners who paid pew rent. The document was written by various clerks in different inks and handwriting, but this transcript has tried to extract as much information as possible. 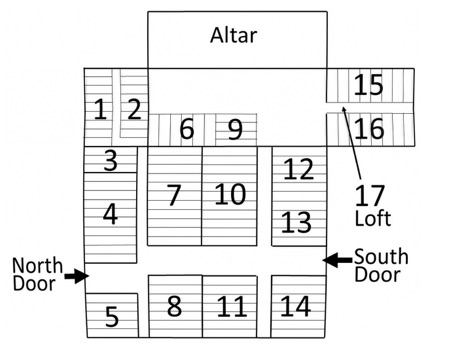 Mens seats above the step on the north side

Mens seats on the south side above the step

At a Vestry(?) [meeting?] held in the Parish Church at Northam the 23rd October 1732 agreed to be inrolled as follows:
That the constant and old custom of seating in this church is for life at one shilling for every life and that it remains.
That upon a dispute & difference between Roger Melhuish against Jno Benson and Mrs(?) Docton about the Pew & seats called Mr Melhuish's seats, tis(?) was agreed by them & approved by the Parishioners that the lives now inrolled in Mr Melhuishes seat remain & as vacanceys happen he & his successors to pay one shilling for every term(?) upon his own or the life of his successor or heirs always to regard eight rooms therein two more And that Mr Melhuish do now pay for eleven rooms in the seat above & seat below the great pew for his own life & to his heirs & successors always to pay in like manner, which if they refuse to do upon proper notice given then the seats above to be filled up by other parishioners & not otherwise.

In the seat above the Great Pew

Womens seats on the north side

The seats behind the great north Church Door

Seats joyning to the north side of the pillers

A Pew below the Alley

Womens seats on the south side of the pillars

Womens seats below the alley

Mens seats on the south side of the church

Womens seats on the south side of the church

Seats behind the south church door

The poor by the tower

Mens seats in the old loft

Seat against the wall