The Note’s author presents and describes a fine illustration of the Willoughby family coat of arms. He then provides much useful information on the family. The Willoughby and Trevelyan families had a long association with Payhembury. The article, from a copy of a rare and much sought-after journal can be downloaded from the Internet Archive. Google has sponsored the digitisation of books from several libraries. These books, on which copyright has expired, are available for free educational and research use, both as individual books and as full collections to aid researchers. 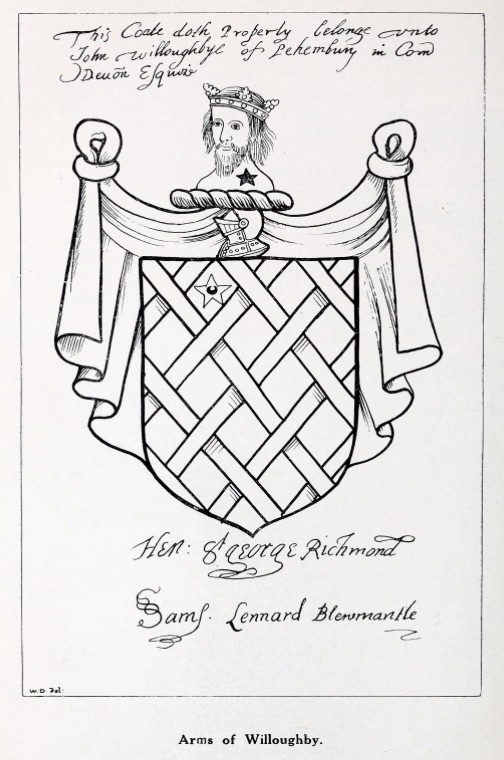 188. WILLOUGHBY ARMS.- The little painting of the Willoughby arms, a drawing of which is printed in this issue, was recently discovered by Mr. H. Tapley-Soper amongst some papers at the Exeter Public Library. The achieve- ment, still in an excellent state of preservation, is signed by Henry St. George, Richmond, and Samson Lennard, Blue- mantle Pursuivant, who conducted the Visitation of 1620. The arms are blazoned: Or, fretty azure, a mullet gules thereon, a crescent sable for difference. The crest is charged with a mullet sable, and the mantling - as is usual in drawings of the period - is coloured gules lined argent. When found it was enclosed in a paper wrapper bearing the following information, written probably towards the end of the 17th century:

The cadency marks show that Mr. Willoughby, of Pey- hembury, was a descendant of Sir William Willoughby, second son of the Sir John Willoughby killed at Tewkesbury in 1471. Sir John was the grandson of Sir Thomas Willoughby, third son of Robert Lord Willoughby. [His ancestor, Sir William Willoughby, married Alice, co-heiress of John Bee of Eresby, whose arms, quartered by those of Ufford, form the coat borne by the Willoughby family, and noted by Mr. W. H. H. Rogers, F.S.A., in "The Strife of the Roses and Days of the Tudors."]

Mr. Willoughby, who was nine years of age at the time of the Visitation of 1620, was the son of John Willoughby, of Peyhembury, by his first wife, Margaret Staynings, of Holni- cote, Somerset. He married twice, firstly in 1634, Mary daughter of Sir John Davie; and secondly, Jane Northcott, a widow, daughter of Sir Richard Strode. His daughter and heiress Mary (by his first wife) married in 1655 George Trevelyan, who was created a Baronet at the Restoration of Charles II.