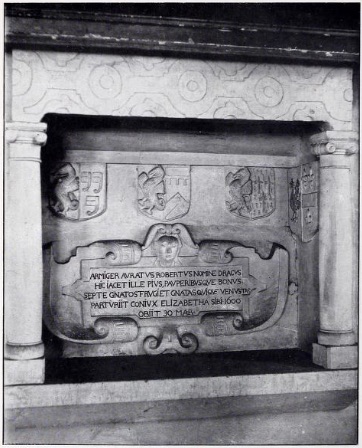 Robert Drake, whose memorial in Southleigh Church, and who is the subject of this Note, resided at Wiscombe Park, more recently a Gothic country house rebuilt by Joseph Power of Colyton for C Gordan in 1826, with some modernisation of about 1880.  White (1850) merely noted it as ‘a pleasant seat’ while Stockdale described it as ‘a very interesting mansion of the Elizabethan style of architecture built about 1826 on the site of the old manor house being situated in a richly wooded vale, has a very pleasing appearance.  This estate in early times belonged to the priory of Otterton and was granted in the reign of Henry the third to Sir William Bonville Knight, in whose time the Park was well stocked with deer The article, from a copy of a rare and much sought-after journal can be downloaded from the Internet Archive. Google has sponsored the digitisation of books from several libraries. These books, on which copyright has expired, are available for free educational and research use, both as individual books and as full collections to aid researchers.

Note 89. - DRAKE TOMB, SOUTHLEIGH CHURCH. On the recessed tomb of Robert Drake, of Wiscombe, in Southleigh Church, are five shields bearing respectively his own arms impaled with those of his wife, Elizabeth Prideaux, of Thuborough [argent, on a chevron sable, a mullet or, in chief a label of 3 points gules), the arms of his father and mother, John Drake, of Ashe, and Amy Granville, of Stowe (gules, 3 rests or), and those of his son and daughter-in-law, William Drake, of Wiscombe, and Philippa Dennis, of Holcombe (ermine, 3 poleaxes sable, 2 and 1). On the sides of the tomb are two larger shields carved by another hand and of a more recent date. The left hand coat bears the arms of Robert's grandson, Thomas Drake, of Wiscombe, impaled with those of his wife Helen, daughter and co-heir of Alexander Walker, of Bampton (argent, on a chevron terminated by a stock and ring between 3 crescents sable, 2 plates). The right hand shield bears the wyvern gules impaled with . . . a fesse between 3 fleurs de lys . . . Can any of your readers identify this impalement ? The bearings are borne by some fifty different families (amongst them Goodhind and Gorges, of Devon), but unfortunately there are no colours on the shield to assist one in identification. Are the arms those of William Drake (son of Thomas) and his wife who died in her husband's lifetime'? (Vivian). According to the same authority, Thomas Drake had nine children, five daughters (all of whom married) and four sons: William; Thomas, ob. ante 1650 ; Alexander, of Southampton; and Dennis Drake, of Churchstanton. The last named married Katharine Thomas, of Southleigh (arms: per pale crenelle or and azure). I am indebted to Mr. A. J. P. Skinner for the accompanying photograph of the tomb, which was taken by Mr. W. Hartley, of Colyton.                 Wilfred Drake.