The Family of Pyne

The Pyne surname has its origins in Devon and the Norman family of 'De Pyn' which settled in and around Upton Pyne to the West of Exeter from the 12th Century. The article, from a copy of a rare and much sought-after journal can be downloaded from the Internet Archive. Google has sponsored the digitisation of books from several libraries. These books, on which copyright has expired, are available for free educational and research use, both as individual books and as full collections to aid researchers. 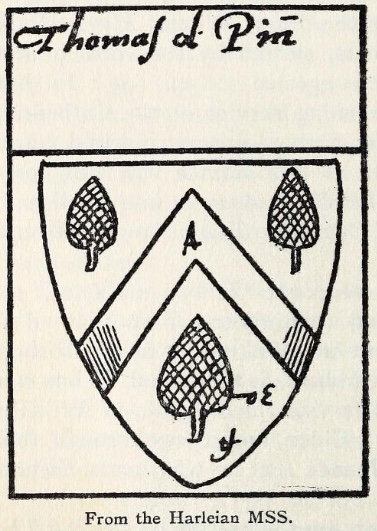 Note 109. THE FAMILY OF PYNE. - The manor of Upton Pyne, as the records show, was held by Herbert de Pyne in 1147, and descended from him in lineal succession to Sir Simon Fitz Herbert de Pyne, Herbert de Pyne II, Sir Herbert de Pyne III, who was lord of the manors of Upon Pyne, Branford Pyne and Washford Pyne in 1234, Simon de Pyne II, Sir Herbert de Pyne IV, who was also lord of the manor of Ham in Morwenstowe, and John de Pyne, who was a member of Parliament in 1332. William, the eldest son of John de Piyne, inherited Upton Pyne, which remained with his descendants until 1487, when Constance Pyne carried it to William Larder in marriage, while the younger son, Thomas, or Sir Thomas de Pyne, inherited Ham in Morwenstowe and other manors. The latter's grandson, Oliver Pyne, acquired East Down by marriage in 1397, and became the ancestor of what is now the elder branch of the family, which in 1797 assumed the additional surname of Coffin.

While much of the foregoing is known to students of Devonshire family history, additional knowledge has recently come to light connecting the English family with a family of like name on the Continent, whose records far antedate the Conquest, viz.: the history of the Seigneurs and Barons de Pins of Languedoc and Acquitaine, who are represented to-day by the Marquis de Pins de Montbrun, the Comte de Pins, and the Baron de Pins de Caucalieres. These records establish the fact that this family is descended from one of the most ancient and noble houses of Spain, the Barons de Pinos of Catalonia, through a branch which settled in France about 1090 A.D. The arms of the French family, which they brought with them from Spain, are: Gules, three pine cones erect, or.

The history of the Spanish and French houses, which has been recorded by historians and preserved in both public and private documents and records, is not a matter of presumption, but of certainty. In the eighth century, about 754 A.D., nine German knights, "as distinguished by their high birth as by their proved valour," crossed the Pyrenees and entered Catalonia at the call of a leader who had gathered together in the mountains of north-eastern Spain the fugitive Christians who had been driven from their homes by the Moors. With the aid of these nine nobles, who were put in command, the war against the infidels was begun. Living in their mountain fastnesses and at first making occasional forays, they gradually advanced into the plains, waging continual warfare with the Moors for many years until the capture of Barcelona in 801. An allusion to the family may be found in the Chanson de Roland, line 199, where mention is made of "la terre de Pine."

In recompense for the services of these nine knights, Charlemagne gave the representative of each knight a barony carved out of the conquered possessions in Catalonia. Some of these noble families have continued to this day, and the head of each family for many centuries bore the title of "One of the Nine Barons of Catalonia." The motto of the French family, descendants of this Spanish family, is "L'un des Neuf Barons de Catalogne."

Baron Pedro Galceran de Pinós, son of the above Galceran de Pinos, was present at the siege and capture of Barcelona. He received a grant from Charlemagne of lands lying a few miles to the south-east of the present Republic of Andorra, adjacent to the town of Baga, where his father had built his castle, "La Rocca de San Jaime," and was the ancestor of a line of nobles who became Marquises de Pinós, Counts of Gurrea, Castro, Guimera and Luna, Viscounts of Evol, Canet, Ilia and Alverforadat, etc., and grandees of Spain. For a thousand years the members of the Spanish family bore the name of Galceran in addition to their surname, in memory of the first of the race who crossed the Pyrenees, and the eldest son of the Marquis de Pins, the present head of the French family, is called Galcerand de Pins.

But the family traditions go back to a still earlier home. It is the common belief of both the French and Spanish houses, that Galceran de Pinos was a German knight named Gerau von Thann of Waldburg in Suabia. The Princes of Waldburg - direct descendants in the male line of the Counts of Thann - have repeatedly reaffirmed this belief by letters and documents interchanged between the three families dwelling in Germany, France and Spain. This common origin is confirmed not only by ancient traditions, but also by the fact that the name " von Thann "translated into French becomes" de Pins " and into Spanish, "de Pinós," and it is an interesting circumstance that the ancient arms of the Thann-Waldburg family, except for the colour of the shield, are identical with those of the families Pins, Pinos and Pyne, being: Azure, three pine cones erect, or. It is certain that the first Galceran de Pinos was a German; and the name of another of the nine barons, that of Pedro Allemann, which means "Peter the Suabian," the Suabians and Allemanni at that period being the same people, seems to be a further corroboration.

This Suabian family - the Counts of Thann - appears to have been founded about 700 A.D. Matthew von Pappenheim, Canon of Augsburg, in his "Chronik der Truchsessen von Waldburg," written in 1527, tells us that Romulus, Duke of Suabia, made one of his officers Count of Thann, giving him the Castle of Waldburg and making him his hereditary Truchsess (or Seneschal). That title has been borne ever since by the family, which, in 1525, became Truchsessen of the Holy Roman Empire. It has been a noble Suabian family for over twelve hundred years and to-day is one of the most ancient of the sovereign princely houses of Germany, the present head of the family being His Serene Highness, the Prince of Waldburg.

The arms borne by the Devon family at the present time, Gules, a chevron ermine between three pine cones erect, or, are identical with the ancient arms of the Pynes of Upton Pyne. Being "canting arms," based on the name, we can be sure that they were not adopted from those of some other family to mark descent or inheritance. We also know that they were borne by the grandson of the first Herbert de Pyne and that, with the exception of the chevron evidently added for distinction, they are identical with the arms of the French family. It therefore seems more than probable that the first Herbert was a cadet of the French family who came to England in the first half of the 12th century with the Empress Maud. He probably landed at Arundel with her army in 1 139, and received a grant of the manor of Upton Pyne, from her brother and supporter, the Earl of Gloucester.

The earliest contemporary descriptions of the arms of the Pyne family in England, which the writer has as yet been able to discover, are contained in two Harleian Manuscripts, Nos. 6137 and 6589, in the British Museum, both written between 1277 and 1285 a.d., in which the arms of Sir Thomas de Pyne of Combe Pyne and Shute are drawn and described as Gules, a chevron argent between three pine cones, or. As these are the arms of the Upton Pyne line, they must have been those of a common ancestor. Sir Thomas de Pyne's father, Thomas de Pyne, was not the head of the Upton Pyne line so we must go back at least one generation further. This would make the elder Thomas a brother or cousin of Sir Herbert de Pyne III, whose father was lord of Upton Pyne in 1206.

This identity of both name and arms makes it practically certain that the Pyne family of Devonshire is descended from the Spanish barons through the French branch. It would be interesting to find some record of the arms borne by the first Herbert or his son, Sir Simon de Pyne of Upton Pyne, although there can be no doubt that they were the same as those of Sir Thomas de Pyne.                                      M. T. P.