While this increased produce of pig iron was being provided for, the Company went on increasing the consumption of pig iron in their own forges. Prior to 1869 70, the manufacture of other kinds of malleable iron than rails and plates had been discontinued, and attention solely given to the production of these two articles. At this time the output of rails, and plates for shipbuilding and other purposes, amounted to about 900 tons weekly, but during the continuance of the demand for iron rails the output of the latter was increased for America and our Colonies, and up to about 1876 the total output of plates and rails was doubled, in some weeks nearly 2,000 tons being made. To attain this, increased power was obtained, and great changes were made in extensions in the malleable iron departments. About 1876 came the extinction of the iron rail trade, and the substitution of steel rails. This at once crippled the 4 malleable iron trade in the North of England, and reduced the output from about 600,000 tons to 300,000 tons per annum, the output at Consett being reduced fully one-third. Having, however, lost their rail trade, the Company kept abreast of the times by meeting the enormous and unparalleled demand for iron ships. During the serious depression between the years 1876-79, they directed their entire power on iron plates. The forges and mills were strengthened, the rail mill demolished, and converted for plate making, till in 1882 the Works turned out frequently 1,900 tons of iron ship plates weekly. To produce this large quantity, there were 170 puddling furnaces, with ten steam hammers and suitable rolling power, and seven plate rolling mills.

At the present time, the production of malleable iron is confined to the Tin Mill, the other puddling mills being dismantled, except the driving engine and trains of No. 1 mill, with fourteen puddling furnaces, boilers, and hammers, which are still existing, but not now in use.

The Tin Mill.-The works here, as already stated, were originally designed for the manufacture of tin plates, but they were converted into rolling mills after their acquisition by the present Company. Now they consist of one puddling and two plate mills. The puddling train is 22 inches, having three stands of rolls, which are driven by a fly wheel engine. There are forty-six puddling furnaces and two cinder furnaces, two 3-ton steam hammers, and two hot-bar shears, with the necessary bar banks, loading gullets, &c. The plate mills are driven by a pair of high pressure direct acting non-condensing fly wheel engines, geared as 1 is to 1, and coupled at right angles. They are 25-in. and 22-in. mills, coupled to each end of the counter shaft, and each having one stand of pinions, one stand of roughing, and one stand of finishing rolls. The 22-in. mill has one stand of chequering rolls in addition. Between the two mills are fourteen cold and wash heating furnaces, mostly working through boilers. Each mill is amply provided with floor space, shearing machines, and plate turning-over gear. There are thirty mill furnace boilers, of the egg-ended Lancashire and vertical type, and two egg-ended hand-fired boilers are also available when needed. The fitting, smiths', and joiners' shops are in close proximity. The make of plates of all descriptions is about 500 tons per week. 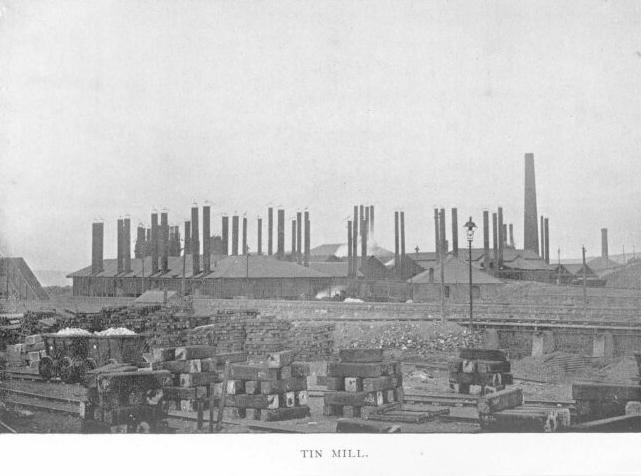 Melting Shops.-In the year 1882, it becoming apparent that the use of steel plates for shipbuilding purposes made by the Siemens-Martin process was rapidly making headway, the Company began the erection of two small 13-ton Siemens furnaces, together with an 8-ton steam hammer and Siemens furnace for heating the ingots. This plant was got into operation the following year, and the manufacture of steel plates from hammered ingots was commenced. These furnaces were very rapidly followed by four other 17-ton furnaces, and shortly afterwards by two more of the same size, all the eight furnaces being in one row. Meanwhile the use of the hammer had been discontinued for cogging; and the Siemens gas heating furnace, used for heating ingots for the hammer, has since been converted into a 20-ton melting furnace, in line with the eight already referred to. 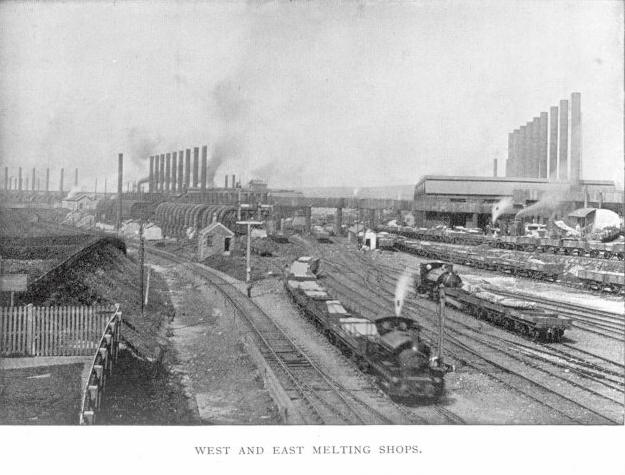 These nine furnaces now constitute what is designated the West Melting Shop. As they have required reconstruction, they have been enlarged to a capacity of 20 tons, and at the present time seven are of that size, while the other two are of 17 tons. The casting pit is parallel with the line of the furnaces, and the ladles are run along over the moulds by being attached, with moveable bars, to the locomotive cranes. Each furnace has a separate ladle and carriage, and the ladle is dried by means of gas from the producers, and is always in readiness so soon as the charge is melted. In the year 1887, the erection of another plant of nine 25-ton melting furnaces was completed, and the furnaces got into operation. These constitute the range known as the East Melting Shop, the general arrangements being similar to those already described. The gas of the East and West Melting Shops is supplied from a range of thirty-three blocks of ordinary Siemens gas producers blown with steam, the gas being conveyed in overhead tubes to the two shops. These two shops were designed by and erected under the supervision of the late Mr. John P. Roe, C.E. All these melting furnaces at present are worked with one gas and two air ports, and have arched roofs. The bricks used for the body of the furnace are principally Sheffield Banister, whilst those for the chequer work in the regenerative chambers are made by the Consett Company, from a local Banister. The two furnaces first erected have butterfly reversing valves; and the others are fitted with double beat disc valves. The ingot producing capacity of these two shops is about 3,500 tons per week.

No. 2 Cogging Mill.-A 28-in. Logging Mill is driven from the No. 2 Plate Mill Engine, through bevelled gearing, and is reversed by steam clutch. The mill was originally designed for blooming for iron, plate making, and was so used for three or four years. When steel came to the front, however, it was found necessary, owing to the limited hammer accommodation at the steel works, to begin the cogging of ingots and consequently this No. 2 Cogging Mill was altered to meet the demand. There not being room to place a bloom shear, a hammer was fixed, with serving tables, worked by steam rams and small engines, for the purpose of cutting the cogged slabs into lengths. This mill is capable of dealing with about 1,400 tons of ingots per week. 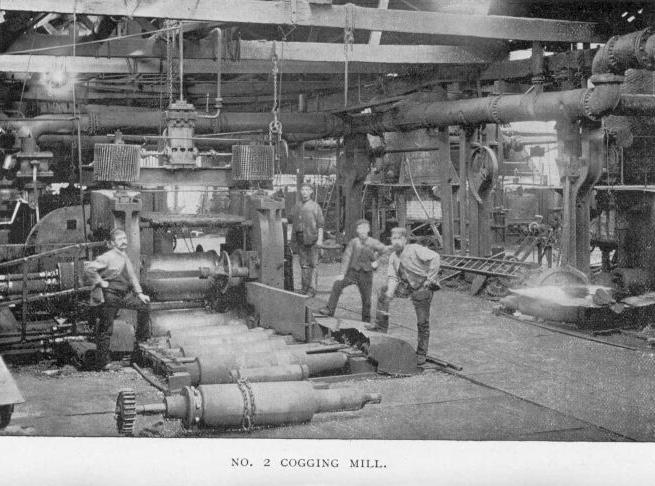 No. 1 Plate Mill.-This has one stand of pinions, one stand of roughing, and one stand of finishing rolls, each 6-ft. 3-in. by 25-in., driven by a high pressure direct acting non-condensing fly wheel engine, the fly wheel weighing 70 tons. A steam lift is provided, whereby slabs weighing from 20 to 25 cwt. may be dealt with. The capacity of the mill for production of plates is equal to 370 to 380 tons per week.

No. 2 Plate Mill is a clutch reverse mill, and contains one stand of pinions, one stand of roughing, and one stand of finishing rolls, each 7-ft. by 25-in. It was originally put down for iron plate rolling. The balance gear for the roughing rolls is carried overhead to save excavation. The mill is driven by a high pressure direct-acting non-condensing fly wheel engine ; and the reverse action is obtained by the five-wheel method and clutch motion. All the wheels, shafts, and clutches are made of Siemens steel. Ample floor space is provided for both of the above mills, and they are covered with a substantial iron roof. Each has conveniently placed for its use large plate and scrap shearing machines. The plate shear, for No. 2 Mill was made by Francis Berry, of Sowerby Bridge; while the plate and scrap shearing machines were made by Joshua Buckton & Co., of the Wellhouse Foundry, Leeds. There are ten egg-ended hand-fired boilers, one Lancashire hand-fired boiler, two Lancashire furnace boilers, and six steam furnace stack boilers. Necessary heating furnaces are also provided for both mills. The output of this mill is about 66o tons of plates per week. 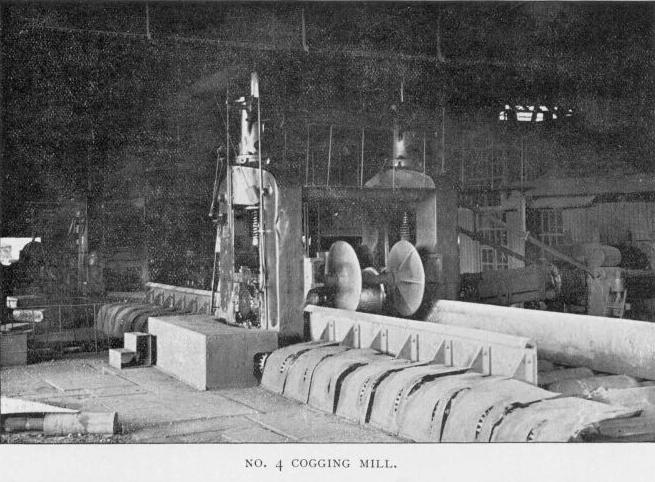 No. 4. Cogging Mill is a 45-in. mill, having one stand of pinions and one stand of cogging rolls; driven by a pair of coupled high-pressure non-condensing direct-acting engines, geared as 21/2 to 1, the wheels, shafts, and couplings all being of Siemens mild steel. The mill is provided with live roller gear on each side, and hydraulic edging gear on the delivery side, for manipulating the steel blooms during cogging operations. The top roll is balanced by hydraulic power, and screwing is done by steam power. In a line with the mill, and some fifty or sixty feet apart, is placed a large bloom shearing machine, driven by high-pressure reversing engines, and provided with the necessary live rollers, mounted in falling tables to the receiving and delivery sides of the shear. The engines were made by Hawks, Crawshay, & Sons, of Gateshead, and the mill by Miller and Company, of Coatbridge, while Buckton and Company, of Leeds, made the bloom shear. This cogging plant was erected in the year 1887, to deal with the ingots produced at the East Melting Shop ; and at the same time Nos. 3 and 4. Plate Mills were remodelled and strengthened. In the cogging square are seven heating furnaces served by a Dubs steam crane. This plant is capable of cogging 2,000 tons of steel ingots per week.

No. 3 Plate Mill has one stand of pinions, one stand of roughing, one stand of finishing, and one stand of chequering rolls, the roughing and finishing rolls being each 6-ft. 3-in. by 25-in., and the chequering rolls 5-ft. 6-in., by 25-in., and all being driven by a high-pressure direct-acting noncondensing fly wheel engine, geared inversely as 11/2 to 1. The steam lift in this mill is similar to that in No. 1. The floor space is ample; and the large plate and scrap shearing machines which stand on it were made by Buckton, of Leeds. Heating furnaces are provided, the whole being covered by a lofty and substantial roof. The mill produces about 360 tons of plates per week.

No. 4. Plate Mill.-This is a 28-in. clutch reverse mill, and is also driven by a high pressure direct-acting non condensing fly wheel engine, the reverse action being obtained by the five-wheel method and clutch motion, and all gearing and shafts being made of Siemens mild steel. 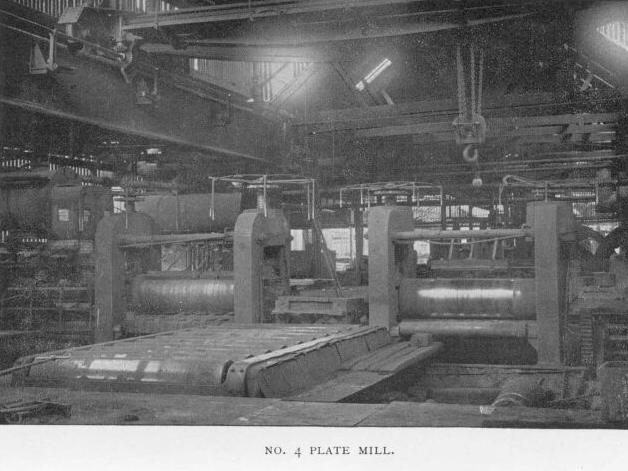 The mill has one stand of pinions, one stand of roughing, and one stand of finishing rolls, these latter being 8-ft. by 28-in. On the delivery side of the mill is provided a traversing steam platform, constructed so as to work the plates to and fro through the rolls, and also to take them bodily from the roughing to the finishing rolls. On the receiving side is fixed a live roller frame, opposite the stand of finishing rolls only. Overhead is a 15-ton steam travelling crane, running upon strong steel-built box girders, which is used for roll changing. The heating power is ample, and there is plenty of floor space. The two large plate shearing machines here were made by Francis Berry, of Sowerby Bridge, and Buckton & Co., of Leeds. The output of the mill is 1,100 tons of steel plates per week.

A battery of sixteen hand-fired Lancashire boilers is placed outside the No. 4 Logging Mill for raising steam for the mills, all made by Adamson & Co., of Dukinfield, near Manchester; and altogether there are in the Logging Mill, and in Nos. 3 and 4. Plate Mills, thirty boilers, six of these being furnace stack boilers, eight are Lancashire furnace boilers, and the rest are Lancashire hand-fired boilers.