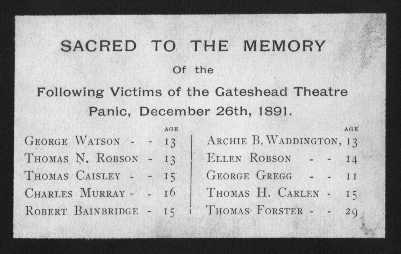 Nine children and one adult died in the ensuing panic when a false fire alarm was given during a pantomime performance at Gateshead's Theatre Royal on Boxing Day 1891. The Memoriam Card reproduced here gives the names and ages of the victims.

The Theatre Royal was just off the west side of High Street, a few yards north of the Ellison Street junction, with its entrance in an alley between the shops. The building had a varied usage. It was built in 1815 as a Wesleyan Methodist Chapel and served that purpose for many years. In 1861 it was sold to the United Methodists; in 1882 it became a "Hall of Varieties"; and then in quick successsion it served as a boxing hall, a venue for bazaars and as a Salvation Army Hall. The building was opened as the "Theatre Royal" on 17th October 1887 and four years later was the scene of the tragedy described above. After partial rebuilding, it was opened as the "Queen's" on 26th December 1894, three years to the day after the tragedy. This venture did not last long, and the building was closed for nearly three years before being reopened on 22nd August 1898 as the "Queen's Theatre of Varieties". The name was changed to the "New Hippodrome" in 1914 and to the "Hippodrome" in 1916, by which time it was featuring a mix of films and variety. The end came with a major fire on the night of 19th December 1922 which severely damaged the building. During 1923 it was replaced by a Woolworth's store facing onto High Street. Part of Ellison Street still exists but it now serves only as a taxi rank and as the route from High Street to the car park of Tesco's store. Tesco's store itself occupies the sites of the old theatre and surrounding shops.