In the previous Chapter, I stated that John Stratford married Margaret, the daughter of Sir Robert Tracy of Stanway and Toddington, County Gloucestershire.

Godgifu, the sister of Edward the Confessor, married Dreux, Count of French Vexin, who died in about the year 1035. Their youngest son Ralph, who died in 1057, was granted lands in England by his uncle, the King, and Dreux is reputed to be the grandson of Walter the First, and the race of Charlemagne.

On his death, the widow of Count Dreux, married the Count of Boulogne, a supporter of William the Conqueror, and through these connections accepted Ralph's son, Harold of Sudeley, as a Norman. After the Conquest, he still possessed lands at Sudeley, and Toddington in the Domesday Survey of 1086.

John, the son of Harold, married Grace, the daughter of Sir William Tracy, who was a bastard son of Henry the First. The elder son carried the name of De Sudeley, but the younger son took Tracy as his surname, after his mother, being the ancestor of the Tracys of Stanway and Toddington. Sir William Tracy was one of the four Knights who murdered Thomas a Beckett.

William Tracy, the son of William was High Sheriff of Gloucestershire in 1416, and married Alice, the co-heiress of Guido De La Spine, and their issue, William Tracy was Sheriff in 1442 and 1443. The issue of this marriage William, who married Margery, the daughter of Sir John Pauncefoot, and Henry, their son, married Alice Baddington, who lies buried in Toddington Church.

During the 12th Century, William Tracy held Toddington for his elder brother at Sudeley, and had been involved with the murder of Thomas O'Beckett, the Archbishop, along with three other Knights, Morville, Fitzurse, and Broto. It is stated that William Tracy, 'Raged over the body of the dead Archbishop, using the blade of his sword to tear out the brains and scatter them over the floor'

It will never be known, whether the murder was pre-planned or performed on the spur of the moment. It has been suggested by some historians that the Knights initially intended only to take Thomas prisoner. It is a matter of conjecture as to whether the act was performed at the King's command. Nevertheless, it was an interpretation of his wishes that caused the crime to be committed.

Sir William Tracy's punishment for his part in the crime was a lifetime of fasting and prayer, and 14 years military service in the Holy Land, but, according to one account, it is alleged that he died in Calabria of Leprosy. Another account states that he died near Antioch in the Holy Land, and was buried before the door of the Temple of Jerusalem. Or were there two William Tracys at this time ? 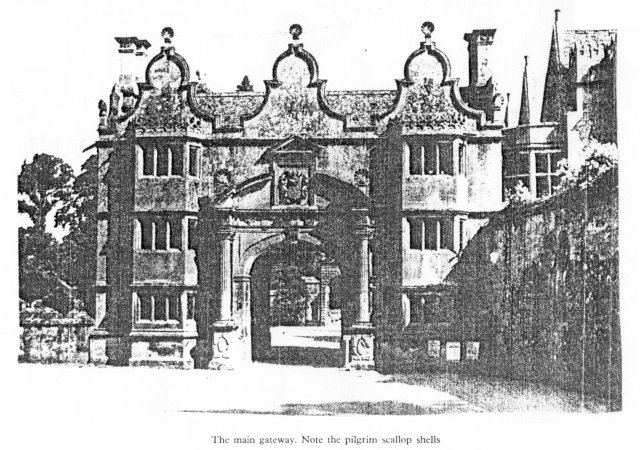 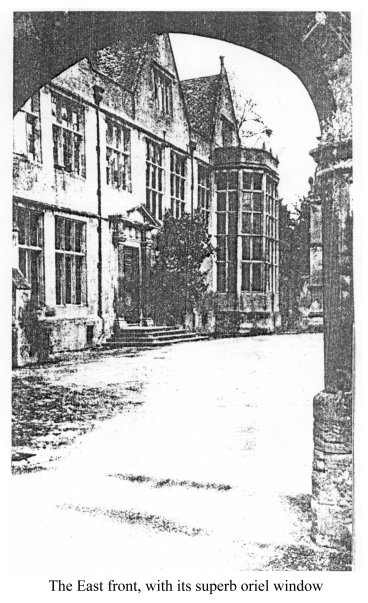 In 1530, Sir William Tracy left a heretical Will, whereby he relied for his salvation on faith rather on the prayers of the Monks.

The marriage of the Tracy daughter to John Stratford of Farmcote built a long lasting relationship with business and friendship, and, together with Richard Tracy, John Stratford assisted in the Dissolution of Hailes Abbey. Richard's father being brought up at Bushley, by the Stratford's.

Richard Tracy acquired Stanway, at the Dissolution and his son Paul was created Baronet in the Reign of James the First, ( 1603 - 1625 ) and eventually passed to a younger son of Toddington. It is presently in the possession of the Earl of Wemys and March, who has a Tracy Pedigree.

William Tracy of Hailes, who was involved greatly with the Stratford's of Bushley, was one of the first to help in the Colonisation of America, through his connection with the Virginian Company and in the year 1620 Sir Paul was in partnership with John Stratford of London, growing tobacco in the Winchcombe area of Gloucestershire.

The Tracy Family history is a book on its own, and I will not attempt to pursue it further, except to state that when the Stratford family became financially estranged at Farmcote, it was Robert Tracy who bought the estate. Today's representative of this great Family is the Baron Sudeley.

The Manor of Merevale, having moved from Hoarsham Grange, was purchased by Edward Stratford who died in 1665, and his eventual descendant, Penelope Bate Stratford, the daughter and co-heiress of Francis Stratford of Merevale, who married William Geast, inherited the property in 1749. William Geast took the surname of his Uncle, John Dugdale, and the estate has descended to the present Sir William Dugdale Stratford Dugdale, Bart.

Sir William Dugdale, and English Antiquary, was born at Shurstoke on the 12th of September 1605, and went to London in 1635. He was a staunch Royalist and achieved several Herald's appointments, being created Garter King of Arms and Knighted in 1677. he died on the 10th of February 1686, leaving issue of a son, Sir John Dugdale, who, in turn left a son William Dugdale of Blythe Hall, who, in turn, left a daughter and heiress, Jane Dugdale.

Jane Dugdale, married Richard Geast, Esquire of Handsworth, and their eldest son and heir, Richard Geast Esquire, Barrister at Law, married Penelope Bate Stratford. He assumed in 1791, the additional surname and Arms of Dugdale, and at his death left issue of three daughters, and a son, Dugdale Stratford Dugdale who was born in 1773, a member of Parliament for Warwickshire from 1802 until 1830, and married the Honourable Charlotte Curzon, the daughter of the First Viscount Curzon.

The issue of the aforesaid marriage was an only son, William Stratford Dugdale Esquire, of Merevale and Blythe Hall, a JP and DL, an MP for Warwickshire, who married Harriet Ella Portman, the daughter of Edward Berkeley Portman Esquire of Dorset. the eldest son and heir of this marriage was William Stratford Dugdale Esquire, who married Alice, the daughter of Sir Charles Trevelyan, Bart. 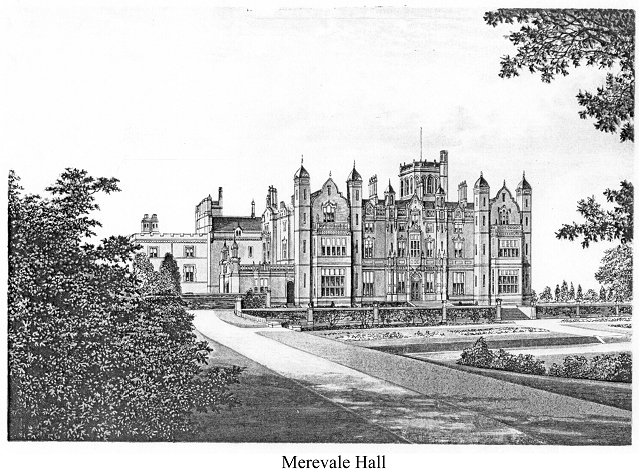 Sir Anthony Throgmorton was brother to Sir Nicholas whose daughter was the famous Lady who married Sir Walter Raleigh, and thus the connections for the Stratford Family, both by marriage and in the cultivating tobacco in the Cotswolds.

Mary Throgmorton, the daughter of Sir Anthony, married John Stratford of Farmcote, and were the ancestors of sons who have formed some of the different branches of the Family. it is very likely that not only friendship between John Stratford and Sir Walter Raleigh was possible, as their wives were first cousins, but there must have been some business connections as the Stratford's were engrossed in the growing of tobacco on a large scale in the Cotswolds, right from the beginning of the introduction into England. It is on record that Sir Walter Raleigh visited Farmcote of several occasions, and the evidence is greatly enhanced as to their relationship by these facts.

There is no evidence to hand which may indicate that the Stratford's were ever involved with Sir Walter Raleigh and the great affair which incurred the displeasure of Queen Elizabeth, but there must certainly have been some family concern over the matter.

According to some Bills of Complaint in the Courts of Chancery, which I have in my possession, there appears to have been an eventual falling out between the Stratford's and the Overburys, and this I put down to the eventual downfall of maybe both Families. There appears to have been great kinship between them for a period of time, especially when William Stratford had married Anne, the daughter of Sir Walter and Lady Magdelene Overbury, and William Stratford senior married Magdelene ( his son's mother in law ) when she became a widow. The Stratford's and Overburys appear to have lived in each others pockets at Barton on the Heath, and presumably at the Manor House there, which Sir Nicholas, the father of Sir Walter Overbury had re-built. The house was until his death occupied by Dr Kathy, Sheriff of Warwickshire.

Several books have been written about the 'Overbury Affair ' which relate to Sir Thomas Overbury, the last man to be put to death in the Tower of London, if so he was, this is part of the mystery. Sir Thomas was, of course, uncle to the said Sir Walter.

The Manor of Barton on the Heath, in Warwickshire, was purchased by Walter Overbury, a younger son of Sir Nicholas Overbury of Bourton on the Hill, at the end of the Reign of King James, and re-built the Manor House. He died in 1637, and had by his first wife Mary, the daughter of Gyles Palmer, an only daughter who married Edmund Meese of Oxfordshire.

His second wife Magdelene, the daughter of Thomas Marsham of London, a merchant and Relict of Edward Grimstone of Suffolk, the eldest brother of Sir Harbottie Grimstone, Bart, and Master of the Rolls, and had issue with him of Nicholas Overbury Esquire who died in 1681, and amongst other issue Anna, the wife to William Stratford junior of Farmcote. Anne Stratford, nee Overbury, and William Stratford's daughter Anna Overbury Stratford, became the wife of De La Pole Corbett, and Wyck Hill House was built for them by her father as a wedding present. This is now the Wyck Hill House Hotel. Anna Overbury Stratford as afore said is buried in the Chancel of Barton on the Heath Parish Church.

It is strange to note that Lady Magdelene, the widow of Sir Walter Overbury should marry her daughter's husband's father.

At the Parish Church of Barton on the Heath, there are several Monuments to the Family, including:

'Nigh this place lyeth the body of Walter Overbury Esquire, aged 67, who departed this life the 24th of May Anno Dom 1700'

Followed by a long verse which he himself had written.

Raised upon a Monument there are two inscriptions with Arms, ' Overbury and Corbett, impaling Stratford. The inscription states. 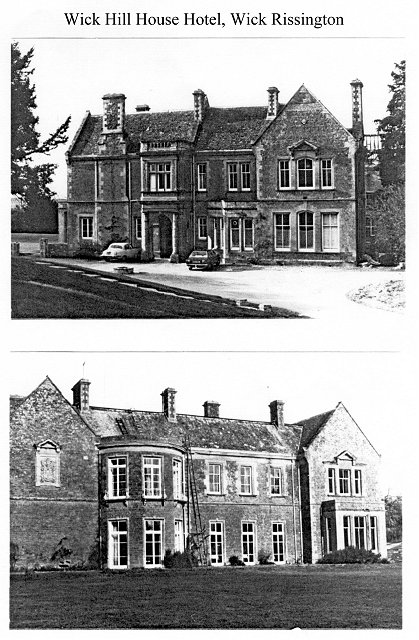