Tradition relates that Thomas Cromwell stayed with John Stratford at Farmcote Manor House, when Hailes Abbey was in the process of being dissolved, but I have no evidence to substantiate this fact, although there is a curious stone chair surrounded by trees about a quarter of a mile from the house in the direction of the Abbey ruins called Cromwell's Clump, Tradition also has it that Sir Walter Raleigh stayed there on several occasions, which of course, is very possible with John Stratford's wife and Sir Walter's being first cousins, and the growing of tobacco being on going at that period of time. Old Farmcote inhabitants can remember that there were some old hut remains in the 1920's which were left over from that era where labourers used to reside during the growing season of the tobacco. What is certain is that Prince Rupert's Cavalry were stationed on the Farmcote Estate prior to the Battle of Edgehill, and that Prince Rupert stayed the night there on the eve of the said Battle. At the West end of North Farmcote House is an earth mound which indicates foundations and remains of a former house. Farmcote Manor House was certainly in being and inhabited by the Stratford Family prior to 1580, when William Stratford and Anne Waiwyn, his wife were in residence, and their Arms are displayed above the old front door.

In the year 1608, when a Survey of Men in Armour for Gloucestershire was taken the following entry was recorded for Farmcote. 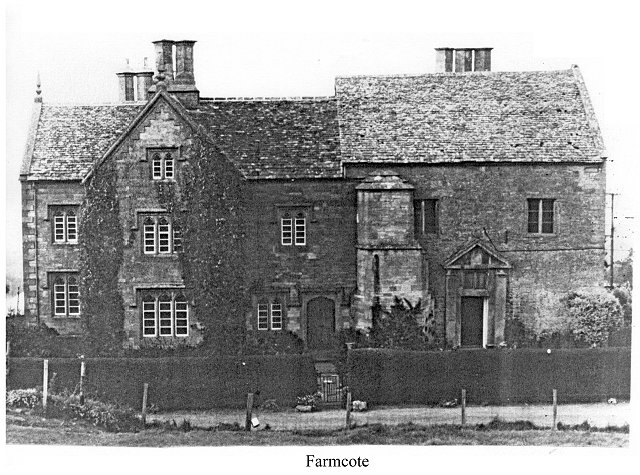 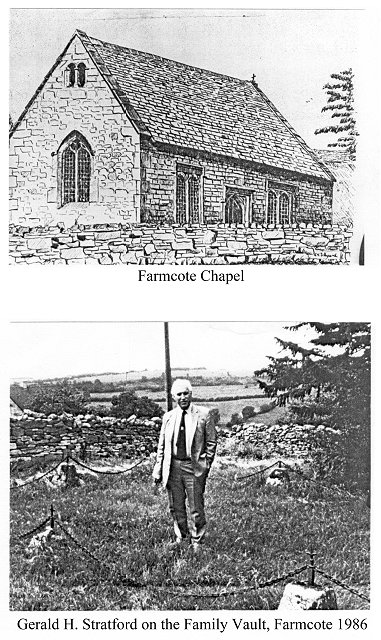 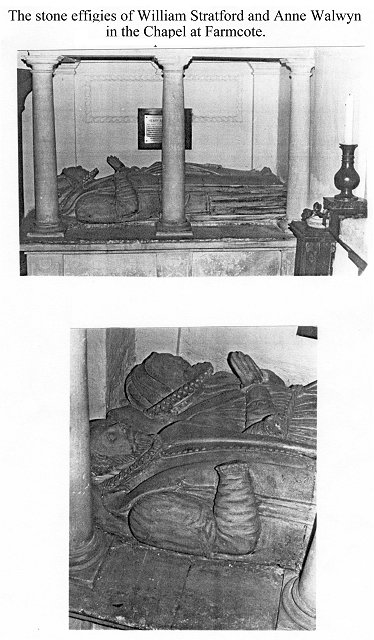 Alwin held Farmcote in the Holeford Hundred during the Reign of King Edward and William Gozenboder held it the time of the Domesday Survey of 1086, when it was then taxed at three Hides, there were 6 Plough Tillages, which 2 were in Demean. During King Edward's Reign it paid 10 Pounds, but only 3 in the Reign of King William.

Farmcote Manor was held under Gozenboder by Goisfred, and John Bonne died seized of the same Manor when it went to the Corbett Family, and Sir Robert Corbett left it to Joan, his wife in dower. Lewis Grevil levied a Fine on the Manor for the use of John Grevil and his wife, Sybel, with the remainder to Guy Corbett. At the death of John Grevil he was seized thereof the Manor, and in 1314 Sir John Linaker died seized of the same.

Whether John Stratford, Archbishop of Canterbury, or Robert his brother, were the next Lords of Farmcote is not proven, but Robert's Arms were displayed on the Manor House of Guiting Power, now the mother Parish of the Chapel of Farmcote, although Rudder attributes these Arms to be those of George Stratford, which were certainly there in 1547.

It is recorded that the Manor came to the Stratford Family soon after the death of Sir John Linaker, and that William Stratford, a Major in the Royalist Cause, was sequested for £763. 14s for Compositer during the Great Rebellion, and that one of the heiresses of the Family who married Sir James Howe, namely Dame Elizabeth Stratford was seized of the Manor of Farmcote, and hath a good seat and large estates in her own right. the deeds of Farmcote, do not substantiate this Statement, as will be shown

There is a Bill of complaint against William Stratford by the Parish Constables regarding the Poor Laws, and William states that Farmcote was a Parish in it's own right, and he was correct for at one time it was in the County of Worcester, and came under the Bishop of Worcester.

Part of Farmcote Manor belonged to the Monastery of Quinnington, and lands here were granted to Richard Andrews and Leonard Chamberlain, with other lands belonging to Hailes Abbey. It would appear, and it is only my opinion from evidence I have accumulated, that the Family may have been in possession of part of the Lordship of the Manor of Farmcote before 1534, but only became resident with a further Grant at the Dissolution of Hailes Abbey, which John Stratford and Richard Tracy were responsible for on behalf of the authorities.

Farmcote was certainly inhabited at a very early stage of history as nearby are the remains of a Roman Camp, and evidence is note regarding Saxon Settlements. the Chapel of Farmcote, St. Faith's was certainly Saxon Architecture in it's structure, and Farmcote belonged to Queen Matilda for a short time. On reaching the Chapel entrance one can see the remains of a Consecration Cross and Mass Dial on either side of the doorway.

The Priest desk, altar rails and pews are dated 1601, with the altar table 1550, and was made for the old stone Mensa., complete with five crosses. Until 1800 the floor was paved with mediaeval tiles and some remains were still exhibited at the Chapel until 1940. I am not aware of where they are now. The Font and West window are believed to date 1050, along with some of the original roof rafters, with an Early English window on the North side with very old glass. Until about 1900 the oak door was also of 16th century and the Bell is 17th Century. Most of the 16th Century woodwork and the Bell were given by the Stratford Family. 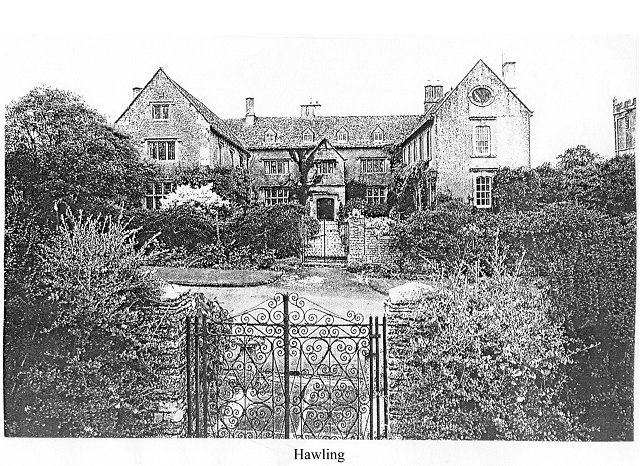 Tradition also has it that to the east of the Chapel the remains of a windmill are visible, with the original being erected by Queen Matilda, but again I have not seen it, and have no further evidence to substantiate the statement.

In the Chapel Yard to the east is a large Vault of the Stratford Family, some ten yards by five, and nearby is a Memorial with the following inscription:

A Memorial on the wall of the Chapel is to Francis Paul Stratford, of Thorpe Lubenham in the County of Northampton and of Bedford Square, London, and late of the Masters of Chancery who died December 1841 aged 89 years. He is actually buried in the Family Vault at Lubenham Parish Church.

A brass cross on the Alter bears the inscription, ' Given by John Farmcote Stratford, R.N.'

There are in the Chapel of St Faith's Farmcote two stone effigies with a notice on the top stating that the recumbent figures are Henry and Mary Stratford, but this again is incorrect. An Inquisition by the College of Arms as to these figures and Arms displayed in Farmcote Chapel took place which is transcribed following, and this also is not correct in it's entirety, which is surprising as they had all the evidence to hand.

Arms as to those figures and Arms displayed in Farmcote Chapel was as follows.

Farmcote Chapel, dedicated to St. Michael and the Angels, ( this should be St. Faith, St Michael is the Parish Church of Guiting.) attached to Lower Guiting.

Tradition has it that there is or was, a passage which led from under the altar of Farmcote Chapel, down to Hailes Abbey, but, again, I have no documentary evidence to support this statement.

Stratfords who lived at Farmcote.

An Abstract of the Title of the Manor and the Moiety of Farmcote Estate, is shown here in parts, relative to interest.

20th May 1712. Indenture between Walter Stratford, Compton Hanford Esquire, Joanna his wife and Frances Baptist, alias Draghay, the daughter of Anne Charmont, deceased who was sister of the said Joanna, regarding intended marriage between Frances Baptist and Waiter Stratford.

14th January 1715. Deed Poll to allow Walter Stratford to take divers sums of money from the estate to meet his commitments and responsibilities.

8th February 1716. Indenture between Wafter Stratford and Bridget Corpson, widow, lending Walter Stratford £500 and Farmcote as security for such.

9th May 1726. Indenture between Elizabeth Lambert widow, and others, regarding money lent to Walter Stratford but not repaid.

18th and 19th May 1732. Indenture by Lease and Release made before Walter Stratford and his wife Frances. In consideration of £4500, sold Farmcote to Elizabeth Northey, who was in possession of the same, naming fields etc. with the option of redemption by Walter Stratford and Frances his wife,

30th December 1742. Indenture between Walter Stratford, the elder and Frances, his wife, William, Walter the younger, Thomas, Edward, Ferdinando, Anthony, Francis and George Stratford, and Charles Barrow of Gloucester who lent them £3000 with Farmcote as security.

31st December 1742. Indenture whereby Henry, Earl of Shelburne, brought a Bill of Complaint in the High Court for non payment of loan and interest.

29th and 30th July 1744. Indenture between Walter Stratford and Frances his wife, William, eldest son and heir, Walter, Edward, Ferdinando, Thomas and Anthony, insomuch £6583 17s was due to Henry Earl of Shelburne, with in December the amount of £7665. 5s 8d was due and with other monies due amounted to £8000 and remortgaged the Estate to John Pratt, heir to the Estate of Robert Tracy by his Will, with the proviso that the said Walter remain Tenant.

31st October 1747. William, Walter, Thomas, Edward, and Ferdinando Stratford in consideration of £12000 did sell the Estate to John Pratt with the consideration that they could redeem the same within 6 months,

13th and 14th November 1749. Conveyed and assure unto John Pratt and Henry Barnes the Manor, Hereditaments and Premises of the Manor of Farmcote.

28th April 1756. Indenture between John Pratt and Henry Barnes, William, Walter, Edward, Thomas, and Ferdinando Stratford, the only surviving sons of Walter Stratford paid out of the Estate £400 due to an indenture of the 1st of October 1747.

The latter is the last time the Stratford's are mentioned in the Deeds to hand, regarding the Manor, and Estate of Farmcote.

Baptisms at Farmcote and Guiting Power.