Document found amongst the papers of John Stratford of Milham Post.
Navy Office Crutchet Fryers.
October 2nd 1765
Merlin Sloop, Richard Stratford No 21.
Entered April 7th 1763 ab
Dyed November 28th 1763.
Wages £5. 19s paid December 17th 1764 to his mother, Susannah, Extrux.
Letter found in the documents of John Stratford of Milham Post.
London April 2nd 1752.
Honourable Sir.
I have now the pleasure to acquaint you that both your sons are recovered of smallpox, and must beg you to acquaint my Brother of it, with my love to him, and I should have wrote to him but thought it might be a surprise as he had not had it, my wife joins me with wishing you the compliments of the day, and Duty to my mother, and love to Sister and all friends. I hope to have the pleasure of hearing from you soon.
I am Sir, Dutiful Son.
Richard Stratford.

Letter found in documents of John Stratford of Milham Post.
London October 15th 1752.
Honourable Sir.
I this day received a second agreeable Letter from my Brother which gave me a great satisfaction in hearing that you had some hopes of Recovering. I heartily congratulate you on it, it is also a Great pleasure to me to think I bear a share in your thoughts and that you are so kind to order my brother to acquaint me of your health which favour I hope you will continue to me. Jany sends some things to her mother so could not miss such an opportunity of Writing to you. My wife joins me in Duty to my Mother and you and I to Sister and Mr. Beal and Sister, when you see them and Returns my Brother a Great many thanks for writing.
I am Sir.
Your Dutiful Son,
Richard Stratford.

Receipt found in the papers of John Stratford of Milham Post.
February 13th 1765. then received of my Master John Stratford, the sum of Six pounds for one Year's wages due Michaelmas last. Received in full by me John Alder.

Letter found in the papers of John Stratford of Milham Post.
Dear Brother.
My father has been with me this week on purpose to talk with me concerning the great affair you have now in hand, not doubting that she deserves the character you give her, we doe advise you to proceed on your courtship and if you succeed I wish you all the happiness that a married state can afford you. My wife joyns with me in Love to your Self and Family. I am your Loving Brother.
John Stratford.
Swindon January 21st 1743.

Letter found in the documents of john Stratford of Milham post.
Dear Cousen.
According to what I promised and you might expect, Ii now acquante you of one thing fitt for you to know relating to the Sea Officer for ye son John. I believe you are willing to putt him to the most considerable of the Marine way, which if you will doe it will require one hundred and fifty pounds or there abouts this being the Leading Amount. Twas necessary you should know it before I can make any further proceeding thereon, and according as you shall Direct me I shall gow on, and as occasion offers from time to time shall write you of what occurs upon that business, assuring you I shall upon all opportunities express my willingness when you and your families my service to and all my good concern. Wishing all of you health and prosperpitie wich is the needful' at present from.
My Dear Cousen.
Truly effectionate kindred and servant
Henry
15th January 1684.
There is a note inserted in the margin reading thus.
I suppose you have heard from Mr Christopher Guise, I gave your command to him.

Letter found in the documents of John Stratford of Milham Post.
London 25th December 1755.
Honourable Madam.
My Pappa ordered me in his name to beg your Acceptance of a Sugar Loaf, which he sent this day by Marie, with the Compliments of the Season to my Uncle and you to whomever all joyn in Love and Dutty. I beg you will excuse this scrall, and if you will favour me with an answer shall Esteem in Honour conferred on. Madam, Your Obliged Servant
and Duttyfull Nevew
Richard Stratford
Pray make the Comp't of this
Family to our Friends at
Cheltenham and Stoak.

A Document found amongst the papers of John Stratford of Milham Post and Swindon.
I John Stratford of Milham Post in the County of Gloucester, Gent, make and publish this my Codicil to my last Will and Testament, in Manner following, to wit, whereas in and by Last Will, I have given to my Daughter Frances Stratford, the sum of four hundred pounds, now, I do hereby order and declare that my Will is that the said sum of four hundred pounds shall not be paid unto my said daughter Frances in case she shall Marry with any man with out the consent and approbation of my son John Stratford, by writing for that purpose under his hand and Seal and in case of my said daughter shall think fit to Marry without my said sons consent then instead of the said Legacy of four hundred pounds, I give unto my daughter Frances the interest of the said sum only during her life to be paid her at equal quarterly payments after the halve of four pounds and ten shillings for one hundred pounds by the year by my said son John Stratford to whom I give the said principal sum, and it is my desire that this present Codicil be annexed to and part of my Last Will and testament to all intents and purposes in witness whereof I have here unto put my hand and seal the sixth day of February in the year of our Lord one thousand seven hundred and forty seven.
Signed Sealed and Published by the said
John Stratford the Testator as a Codicil.
To be amended to his Will in the presence of us Jul Applegarth, S'M Heaveny W'M
Simon

The said George Stratford in consideration of the Sum of six hundred and seventy and five pounds to be payed in manner following. Doth cordial and give to convey all his rights, Title and jurisdiction in all his messuages, land and tenancy lying in Barton upon Heath, in the County of Warwick, and also one moiety of Milham Post and the ground there adjoining, lying in Hailes, in the said County of Gloucester, as the said are divided. To hold the same for ye said John Stratford, his heir, as after, for ever free from Encumbrances, made by him the said George Stratford.

A Transcript of the Will of Eleanor Sankey, the widow of Sankey, and also the widow of Robert Lawrence of Sevenhampton, the daughter of John Stratford of Farmcote. The Will was made in 1605, and proved in 1606. 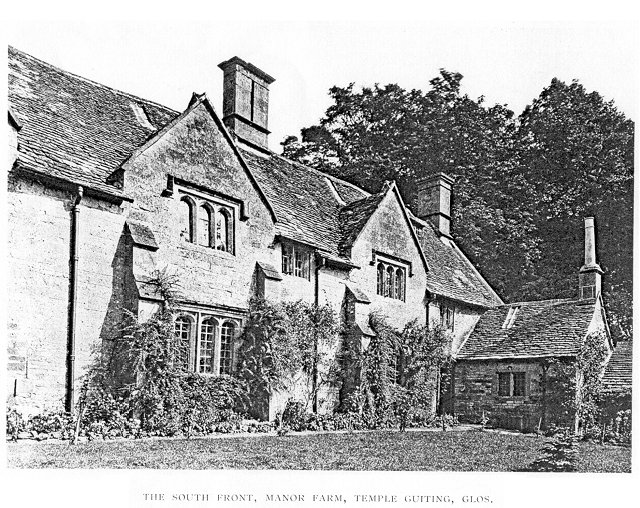 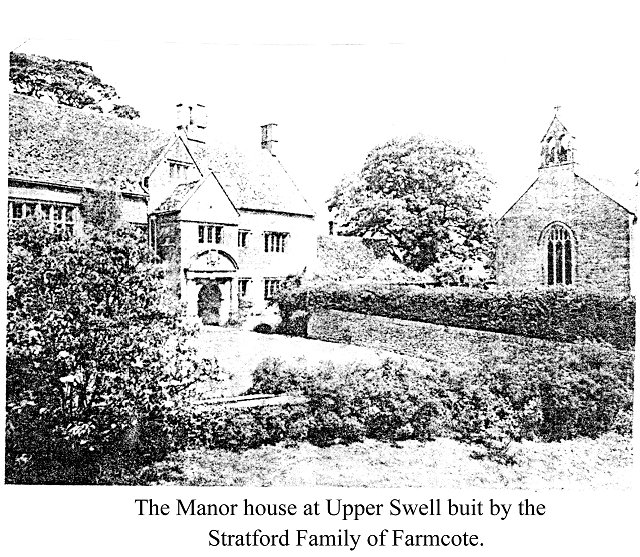 The Will of Antony Stratford.
In the name of God Amen. The 10th of October 1685. I Antony Stratford of Temple Guyting and Upper Swell, the son of George Stratford of Farmcoat, in the County of Gloucester Esquire, being of perfect mind and memory, thanks be to God for the same.

Doe make this my Last Will and Testament in manner and form following. Firstly and principally I commend my Soul into the hands of Almighty God my Maker, hoping through the only merits of Jesus Christ my lone Saviour to be made partakers of Life Ever lasting, and as for my body I commend to the earth whereof it was made, to be buried by an Hearty Orthodox Minister of the Church of England to whom I give twenty shillings, with the Common Prayer, and with a Sermon in the Town where I last lived and dyed and the charges of my Executors here after named, not doubting in the least but at the General Resurrection I shall receive against the same by the mighty power of God. and, for my worldly Estates wherewith it hath pleased God to bless me in this life. Firstly I give to my nephew Tracy Stratford ten pounds. I give to my niece Sussanah Bedde, daughter to my sister Booth, five pounds. I give to Mr. Dennis Huntingdon Parson of Preston, five pounds, to be divided equally amongst the four brothers as a testimony of my love to buy them rings or books. I give to the poor of Winchcombe twenty shillings, to the poor of Temple Guyting twenty shillings, and to the poor of Lower Guyting twenty shillings. I give all my books to my Godson Antony Stratford the eldest son of George Stratford of Temple Guyting. I give to my daughter in law, Margaret Oldisfield her mothers picture in a golden ring. I give all my wearing apparel to be disposed of as my Executors shall think fit .Lastly, I the said Antony Stratford do constitute and order my cousin, George Stratford of Temple Guyting to be my only Executor of this my Last Will and Testament. In witness whereof I have set my hand and Seal.
Revoking all other Wills.
Antony Stratford.
Subscribed and sealed in the presence of
J.C. John Comysir. X Ann Commins her Mark.

Document amongst Probate Record of Gloucester.
Whereas George Stratford late of Temple Guyting in the County of Gloucester, Gentleman, deceased, dyed intestate and a widower and also very considerably indebted unto diverse persons and preserving his name behind him to pay off and satisfy his debts. I Elizabeth Stratford of Temple Guyting aforsaid widow, who was mother of the said George Stratford do now therefore by these present utterly renounce taking administration to the personal Estate of the said George Stratford and doe lease it for other persons to do if they please. Witnessed my Hand and Seal this fourteenth day of October Anno Dom 1704.
Elizabeth Stratford.
Witnessed hereunto, Robert Hayward. Oliver Read, William Baylis, Robert Brooks.

A Bill of Complaint at the Court of Chancery.
24th October 1718.
The Answer of Sir Francis Fortescue, Baronette, one of the defendants to the Bill of Complaint, reciting that Anne Gwuillum and Joanna were Sisters, etc.

May it please your Lordship to grant unto your Orator, and make most gracious writ or writs, to be diverted to them, the said Katherine Overbury, John Cowley, and George Stratford, then by remainder, then at a certain day and a certain time to be limited equally, to be, and appear before your Lordship, in by, making High and Honourable Court of Chancery, set forth the time of all and singular, and further to grant and abide further, be agreeable to a Justice and Equity Deed.
Paul Farewell.