Edward Stratford, the eldest son of Robert Stratford, who migrated to Ireland in 1660, purchased the fee of several farms and leaseholds which his father had held, plus the Lordship and Manor of Little and Great Belan, and Pill which he purchased from Lord FitzHarding. He built Belan House, mostly from the stone of Belan Castle which his father had also owned which had become ruiness after the Rebellion of 1641. In 1709 a Dr. Thomas Molyneux MD paid a visit to Belan on which he wrote.

'Friday, 25th November, left Knockbegg and arrived in one hour and a half of Kilkea to Belan, Mr. Stratford's in the County Kildare. Here is a very handsome improved a garden of greens, grass and gravel, very pleasantly situated on the banks of a small river ( the Greese ) which is very prettily cut into canals and fish ponds, and well sheltered by well grown tree.'

John, the First Earl, enlarged Belan House and according to Thomas Milton's Views in Ireland ' published in 1821, he states ' Belan House was built in the year 1743 under directions of Castell, the Architect, and Bindon, a painter '. I really cannot see the truth in this statement for if, as previously stated, King William was entertained at Belan by Edward Stratford the house must have been standing in 1690 and was in existence in 1709 as shown by Dr Molyneux. Maybe it was another house, but more probably the house was largely extended, for students of architecture noted that the projecting ends of the house were not bonded to the main structure and at the North east corner, the addition actually became detached from the main structure wall and imitation stone was cut where the bonding should have been. 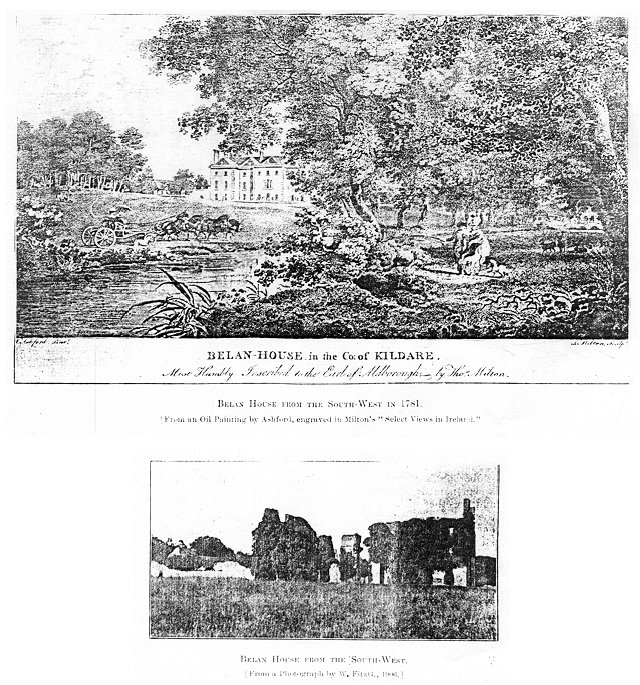 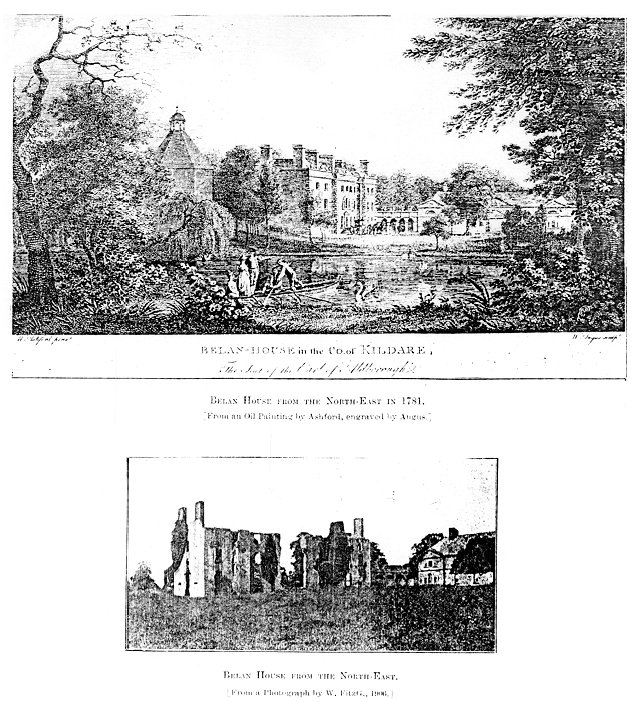 The house is now totally ruined but the remains can still be seen. It was built mostly of brick, cemented outside to look like cut stone and originally consisted of a ground floor surrounded by an area of Park, three storeys and attics. the building ends were vaulted with brick though the main body was not.

Its length was 120 feet by 44 feet breadth and J. N. Brewster in his ' Beauties of Ireland ' described it in 1826.
' Belan House is a large but plain pile of building not remarkable for the elegance or aptitude of its respective apartments. Although the exterior has little, in an architectural point of view to arrest the attention, whilst even the best rooms are of a confined character when compared with the real extent of the building, there is certainly on the whole a messy and commanding structure. But the examiner finds with surprise that at the time of its erection Belan was deemed the first Mansion in Ireland'

A story is related, whether true or not, that a Lawyer named Lewis, fraudulently obtained a long lease of the house and with a man of the name of Mercer dismantled the house and demesne and auctioned the same which was used in the erection of Public Buildings in Athy. The fireplaces and furniture were sold, including statues within the grounds. Doors and stutters were used at Newton House for flooring in stable lofts and the Great Gates are now at Carlton. A Mr. Kirkpatrick bought at Auction stone vases and urns which stood on the parapet of the house.

The ruins of the house and the grounds were leased in 1845 to a Mr. Michael Deevey, who, in 1879, bought them through the Encumbered Estates Court, and, at his death, left them to his nephew. Mr. James Lawler of Pill.

Milton's Select Views of Ireland, published in 1821, shows the front of the house with a fish house and the Chainy Bridges and dated 1st July 1783. Another view is from the back showing extensive stables, a pigeon house, Swans on the River Greese and a boating party with a Summer House in the background.

Another picture of the house is incorporated in a painting at Waddesdon Manor, by Wheatley being commissioned in about 1779.

In the Journal of the County Kildare Architectural Society, Vol 5, No 5, January 1908, there is an article named ' Recollection of Visits to Belan house ' the article refers to a letter received from a lady who wished to be anonymous. As the Auction was in 1835, the visit must certainly have been before this, and the lady certainly speaks as a little girl at her visit. It is a very long letter so I will deal with the parts relevant to the house itself.

The Great House stood in its lovely grounds, itself a beautiful object, a fine stone building. A magnificent flight of Granite steps with two stone vases at the top led to the entrance door. Though uninhabited for fully ten years, ie since 1823 when John died, the house was in perfect repair, no trace of damp or decay, and to all appearances might have been lived in a week before. i have not a distinct recollection of all the rooms, but the dining room is fresh in my memory, also the saloon, and his Late Lordship's bedroom. the dining room not very large, was panelled, Family Portraits being set in the panelling. I was too young to care about them, but I feel sure that they were all men. Had there been lovely ladies or pretty children amongst them, I should have remembered them. The Saloon was lovely, with a polished floor of narrow oak boards, the ceiling represented blue and white fleecy clouds, the paper was sky blue with gold stars. At the bottom of the room, looking on the grounds, was a very large window with a rounded top. Opposite to it at the top of the room, hung a portrait of Miss Best, Lord Aldborough's granddaughter, ( Georgina Best married John, 1st Lord Tollermarche and born in 1805 ) It represented a girl about 13 years of age skipping a pretty brown haired child with brown eyes and bright colouring, smiling, and showing her beautiful white teeth, which she kept to the end of her life. Under the Portrait was a beautiful damask sofa with a Gilt frame and a few chairs of the same kind were scattered about.

I never thought of asking why the house was uninhabited. On one occasion my sister and myself occupied His late Lordship's bedroom, very comfortable it was, of moderate size, the fireplace, and those other bedrooms, surrounded with the prettiest tiles I have ever seen, the ground white with pink and blue landscapes, figures and flowers on them. a fine four poster bedstead. Indian chintz curtains and some Chippendale chairs and a wardrobe are all I remember of its furniture.

The grounds of Belan were very beautiful and of considerable extent. On one side, though not seen from the house, were the celebrated fish ponds, large and deep, the trees around them giving them a secluded and fascinating look. the gardens were at some distance from the house and were large and walled in.

I have, hitherto, been writing of Belan as entered from the side of the river, but the Grand Entrance was approached from Moone by a long Avenue with a wide piece of grass on either side, with trees at the back, very handsome and about one mile in length.

This Avenue was ended by a very high and beautiful gates ( now at Carlton, County Kildare ). On either side were low, white circular walls with trees at the back.

Beautiful Belan now lies in ruins, the wind blowing where it listeth, sighs over a desolate grounds, once so beautiful. A herd lives in the yard, the sole occupant of the lovely demesne. And thus has passed away a race once Great, Wealthy, and Powerful, and the Name and their Place are known no more.

Aldborough House was the last Great House to be built in Ireland in the Eighteenth Century, but it never realty prospered. The foundation was laid down in 1792 and after its completion there is no record in my possession that any of the Family made it their permanent residence, and, although it bears the date 1796, evidence shows that it was still not fully completed by 1798. It included a Play House , a cold bath and a music room ' and on Edward, Earl of Aldborough's death, the property became owned by his wife.

The front elevation is very impressive, with wings on either side, one of which was eventually pulled down after being allowed to dilapidate. It is built of brick, and cut granite forms the facade, and when built, had balustrading all the way around the parapets, with urns and eagles, sphinxes and lions, and a Coat of Arms, displayed bearing Stratford, Herbert, Henniker, North, Neale, and Major.

On entering the house there is a small vestibule with plaster plaques in relief and leads into the Great Hall, very spacious and square, with elevation to the roof of the building which is glassed over at this point. the Great Staircase is of stone with metal balustrades, three on each step, and solid mahogany handrail all the way up.

There are seven doors off the hall leading to the wings, back stairs and apartments. A round room at the rear with covered recesses, two Adam Overdoors, and the doors in the dining room are special in their appearance. On the First Floor the plan is very similar but the rooms much higher and therefore even more impressive and have communicating doors so that one can walk the length of the house.

Only one Wing still stands and contains one spacious apartment and is believed to have been the Theatre. 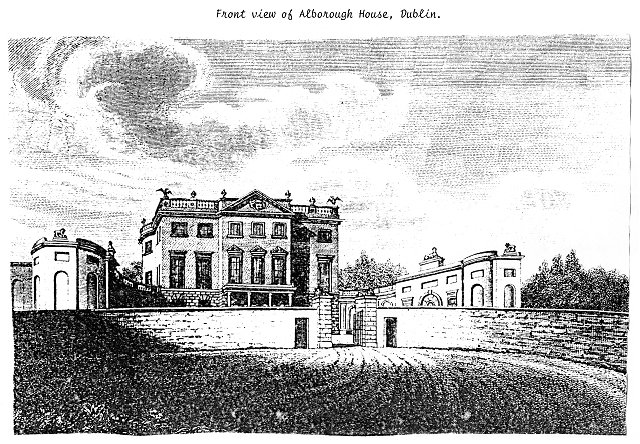 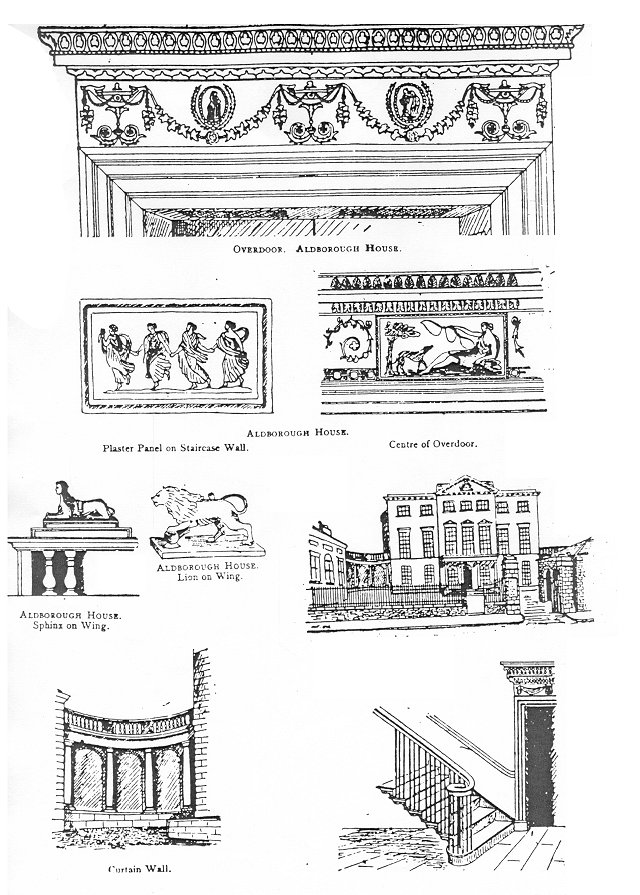 Records show the Ceiling had paintings on them, but, alas, they have been renewed or coloured over with modern white paint, as well as the original Bossi Mantelpieces which have been removed, although one or two Adam Medallions still survive.

It was uninhabited from 1802 to 1813, when Prof Von Feinagle leased it and opened it as a school. he built an addition to the house including large classrooms and a Chapel. He died in 1820 and by 1830 it had been closed altogether as a school.

Nothing has come to my notice of the house after the school closed until the outbreak of the Crimean War when it was used as Barracks on acquisition of the Government, and now it is the Stores Department of the Post Office.

The house was built by Edward Stratford, later the Second Earl of Aldborough, between 1770 and 1776, and forms the Northern End of Stratford place, off of Oxford Street in London, and is of Robert Adams Design. He paid £40.000 for the site which had contained the Mansion House for the Lord Mayor. there have been several people of note who stayed there including the sons of the Tzar of Russia, and the wife of Sir Winston Churchill was born there, and the house until 1832 was owned by the Wingfield Stratford's who inherited it from Edward's Will. It is now in the ownership of the Oriental Club 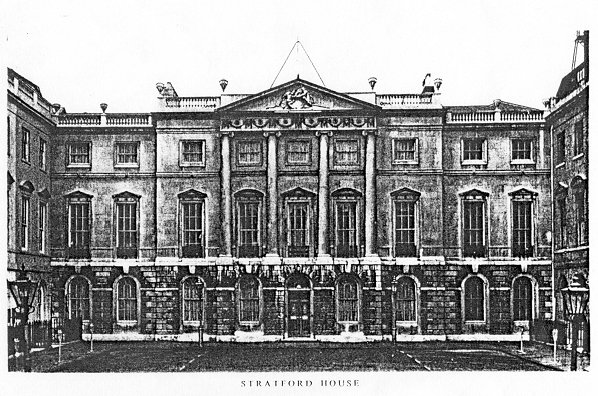