"ACCRINGTON, a town, two townships, two chapelries, and a subdistrict, in Whalley parish, Lancashire. The town adjoins the E Lancashire railway, near the Leeds and Liverpool canal, 4 miles by road and 5¼ by railway E of Blackburn. It is large and thriving; has sprung up within the present century; is a seat of petty sessions and county courts; publishes a weekly newspaper; carries on industry in twenty cotton factories, three print works, extensive turkey-red dye-work, several large chemical works, foundries, steel-works, and a brewery; is well supplied with water from reservoirs; and has a head post office, a r. station with telegraph, a banking office, four hotels, a market house of 1868, public rooms of 1857 in the Italian style at a cost of £8,000, a mechanics' institution, a museum and pleasure gardens, a church enlarged in 1826, a church of 1841 in the early English style at a cost of £8,000, a church of 1866, two fine Wesleyan chapels of 1845 and 1866, nine other dissenting chapels, a Roman Catholic chapel, seven public schools, and two annual fairs. Pop. in 1851, 7,481; in 1861, 13,872. Houses, 2,579. The townships are New A. and Old A. Acres, 2,480 and 740. Real property, £52,634; of which £8,409 are in mines. Pop., 11,853 and 5,835.The chapelries are St. James and Christchurch; and both are p. curacies in the diocese of Manchester. Value of each, £300.* Patrons of St. J., Hulme's Trustees; of C., Trustees. The subdistrict is conterminate with the two townships."

Monumental inscriptions and the burial register of the Machpelah Baptist church have been published by the LFH&HS.

Details about the census records, and indexes for Accrington.

The surviving records for the parish church of St James commence in 1766. An index of marriages 1813-1837 has been published by the LFH&HS.

The Register Office covering the Accrington area is Hyndburn and Rossendale.

You can see pictures of Accrington which are provided by:

"ACCRINGTON, a chapelry, post-town, and considerable village in the parish of Whalley, and hundred of Blackburn, in the county palatine of Lancaster, 4 miles N.W. of Haslingden. It includes the two townships of Old and New Accrington, and has become within the last few years a place of some consequence. The population has increased at a very rapid rate. It is situated on the river Henburn, near the Leeds and Liverpool canal, and is a station on the East Lancashire railway. Its importance is derived from its position in the centre of the calico-printing trade. Several large cotton-mills and print-works have been established, which afford abundant occupation to the working classes. Many hands are employed in the coal-mines and quarries. The living of Old Accrington is a perpetual curacy in the diocese of Manchester, value £300, in the patronage of Hulme's Trustees. The church was taken down and rebuilt in 1826. The living of Christ Church is a curacy, in the patronage of trustees. There is a national school which was erected in 1806."

In 1835 Accrington was a chapelry and township in the parish of Whalley.

You can see the administrative areas in which Accrington has been placed at times in the past. Select one to see a link to a map of that particular area. 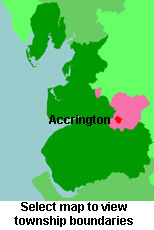 View maps of Accrington and places within its boundaries.

A map of Accrington East and West around 1890.

Andrew Jackson provides information about the Accrington Pals and the losses that they suffered at the battle of the Somme.