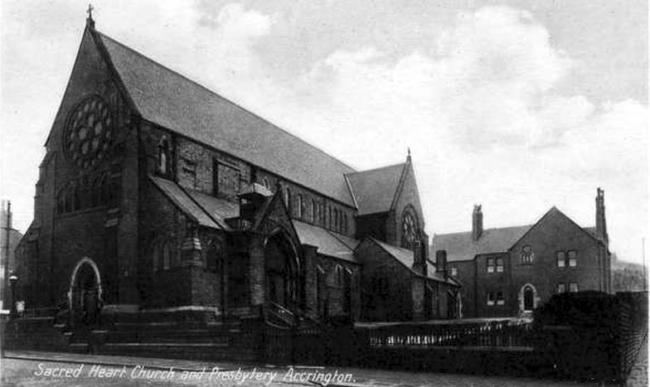 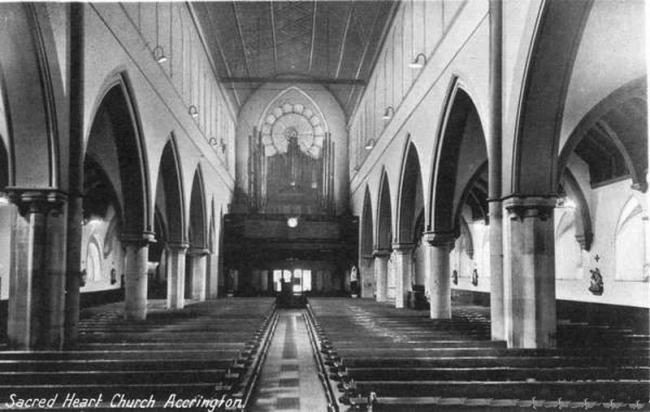 The Jesuit Fathers, who had long been in charge of the church at Clayton-le-Moors, eventually handed over this mission to the Bishop and started to build up another some miles distant at Accrington. A piece of land was given for the purpose by Henry Petre of Dunkennalgh, thus continuing the long tradition of generosity to the church of the Dunkenhalgh family.

This first parish in the Accrington district was in Hyndburn road in the parish of Church, and from 1852 to 1869 remained here under the name of St. Oswald's. Then Fr. Maguire obtained a piece of land in a more central position, and here was built a new church under the invocation of the Sacred Heart. The new church was a building of fine proportions in the style of thirteenth-century Gothic.

It is recorded that the first public procession organised by the Catholic congregation of Accrington was in 1856 after the declaration of peace at the end of the Crimean war. The procession wound its way into Oswaldtwistle and ended up with coffee and buns for the children, since which date no parish celebration is complete without the coffee and buns.

At the joyful celebration of the church opening on August 5, 1869, Dr. Turner, the Bishop of Salford, was present and the well-known preacher and writer, Fr. Gallwey, S.J., addressed the assembly.

Since that date the parish has been served by a long series of devoted priests, who have watched over the growth of the parish and have provided improved schools, and have built up a well organised social life in the parish. The congregation of the Sacred Heart is rightly proud of the number of vocations it has fostered. During the 1914 war the parish had 942 names on its roll of honour.

Since 1917 the parish has been under the capable direction of Fr. McEvoy, whose work for education is well known. In 1931 a chapel-of-ease was founded at Huncoat.

Charles Henry Collyns . . . . . He had been promoted to priesthood in the Ember-week of September, 1851. The year following witnessed his appointment as the first missioner of St. Oswald's, Accrington, which he served nearly a twelvemonth, when, in September, 1853, his services were transferred to Liverpool.

From - Collections Illustrating the History of the Catholic Religion