ALLERTON, a township, with a r. station, in Childwall parish, Lancashire; 4½ miles SE of Liverpool. Acres, 1,531. Real property, £8,361. Pop., 559. Houses, 94. Here are Allerton Hall, Allerton Priory, the famous Allerton oak, and the ancient monument of Calderstone, supposed to be druidical. Allerton Hall was at one time the seat of Mr. Roscoe, anthor of the "Life of Lorenzo de Medici."

Details about the census records, and indexes for Allerton.

The Register Office covering the Allerton area is Liverpool.

You can see pictures of Allerton which are provided by:

"ALLERTON, a township in the parish of Childwall, hundred of West Derby, in the county palatine of Lancaster, 4 miles to the S.E. of Liverpool. It is near the river Mersey. Allerton Oak is an ancient tree standing on a farm in this parish. Here too is the rude monument called Calder Stones, considered by some to be Druidical. Urns of clay, with human bones, have been dug up near it. Allerton Hall was once the seat of William Roscoe, the historian, author of the Lives of Lorenzo de Medici and Leo X. Allerton Priory is another seat here."

In 1835 Allerton was a township in the parish of Childwall.

You can see the administrative areas in which Allerton has been placed at times in the past. Select one to see a link to a map of that particular area. 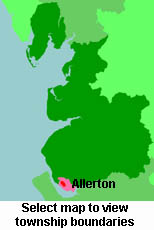 View maps of Allerton and places within its boundaries.