Details about the census records, and indexes for Ardwick.

The Register Office covering the Ardwick area is Manchester.

You can see pictures of Ardwick which are provided by:

"ARDWICK, a chapelry in the parish of Manchester, in the county palatine of Lancaster, forming a constituent part of the town of Manchester. Ardwick station is the point at which the two great lines of railway, the Manchester and Birmingham, and the Manchester Sheffield, and Lincolnshire, unite. The river Medlock passes through the chapelry. Ardwick Green, which is about 2 miles from the Exchange, forms a pleasant approach to the town of Manchester. It is a kind of square, with an ornamental piece of water, lawns, shrubs, and walks. The living is a perpetual curacy in the diocese of Manchester, value £294, in the patronage of the Warden and Fellows of the Collegiate Church of Manchester. The church is dedicated to St. Thomas. The cotton manufacture, and other departments of the general Manchester trade, form the staple occupation."

In 1835 Ardwick was a township in the parish of Manchester.

You can see the administrative areas in which Ardwick has been placed at times in the past. Select one to see a link to a map of that particular area. 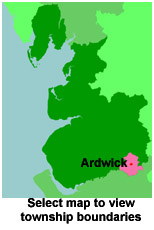 View maps of Ardwick and places within its boundaries.