The following books contain useful information about the history of Ashton in Makerfield and the surrounding area.

Details about the census records, and indexes for Ashton in Makerfield.

The Register Office covering the Ashton in Makerfield area is Wigan & Leigh.

You can see pictures of Ashton in Makerfield which are provided by:

"ASHTON-IN-MACKERFIELD, (or Ashton-le-willows), a township in the parish of Winwick and hundred of West Derby, in the county palatine of Lancaster, 2 miles to the N.W. of Newton. Wigan is its post town. It contains the hamlets of Ashton Heath, Downall Green, and several others. The Wigan and Newton railway passes near the village on the east. There are in the surrounding district many collieries, potteries, and cotton-mills, in which most of the population are employed. The manufacture of locks, screws, nails, tools, &c., are also carried on here. There are two benefices, a rectory value £550, in the patronage of the Earl of Derby, and a vicarage value £245, in the gift of the Rector of Ashton; both in the diocese of Chester. The church of the latter is dedicated to St. Thomas, that of the former to the Holy Trinity. The Roman Catholics, Unitarians, Wesleyan and Primitive Methodists, Quakers, and Independents, have chapels here. The charitable endowments amount to £130 a year. There are two schools belonging to the Church of England, and one to the Roman Catholics.

In 1835 Ashton in Makerfield was a township in the parish of Winwick.

You can see the administrative areas in which Ashton in Makerfield has been placed at times in the past. Select one to see a link to a map of that particular area. 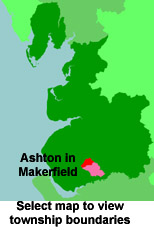 View maps of Ashton in Makerfield and places within its boundaries.