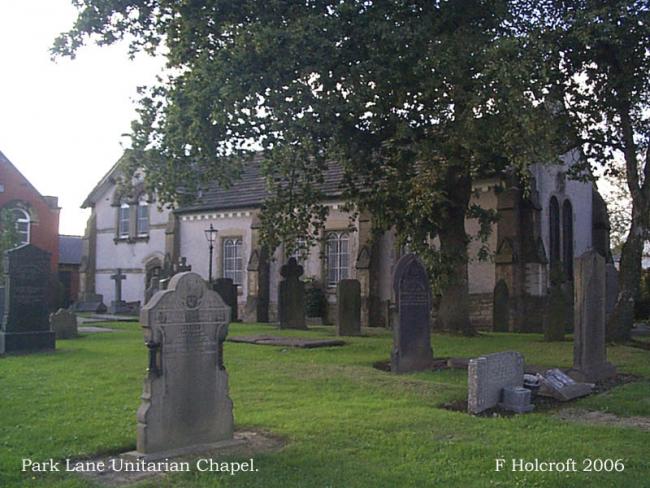 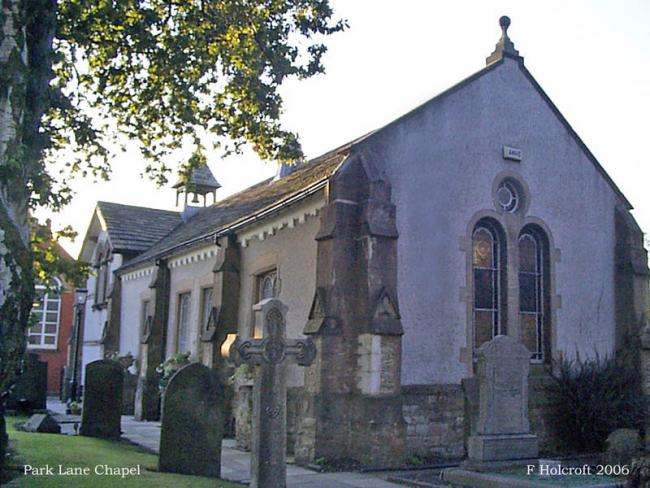 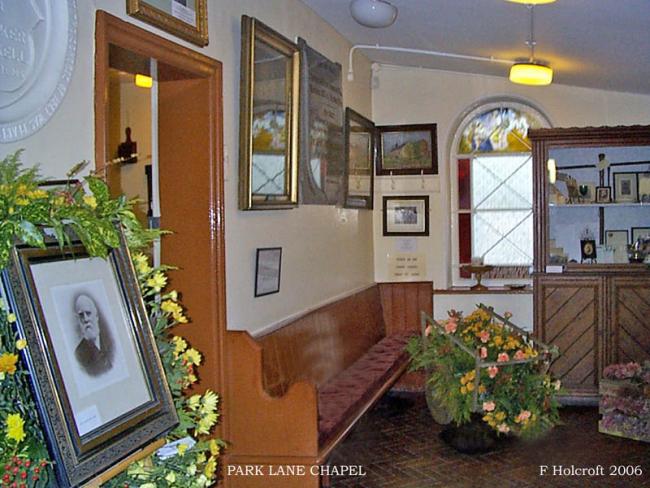 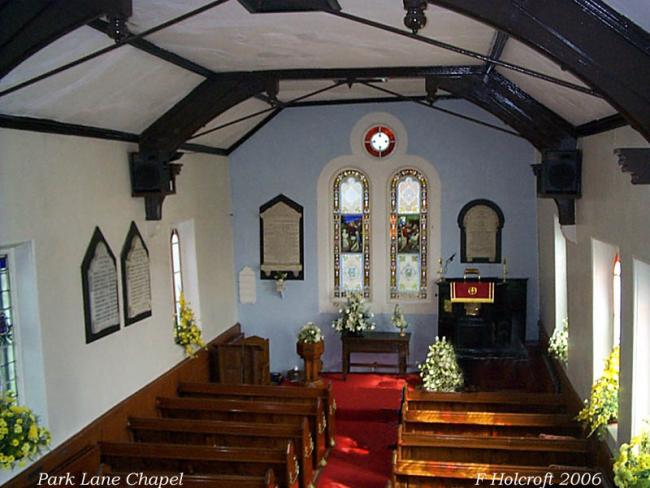 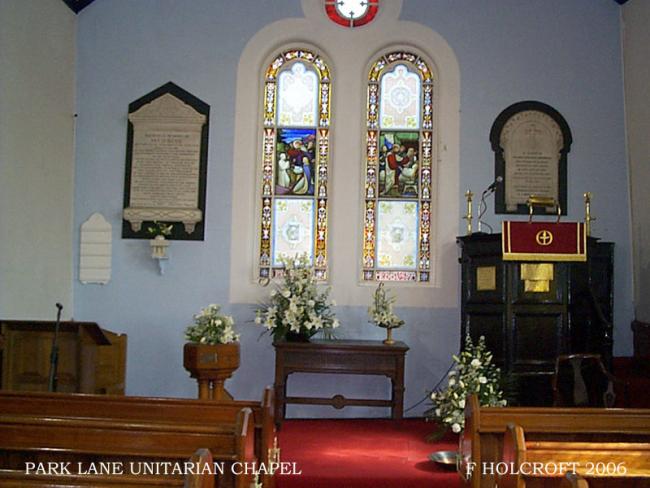 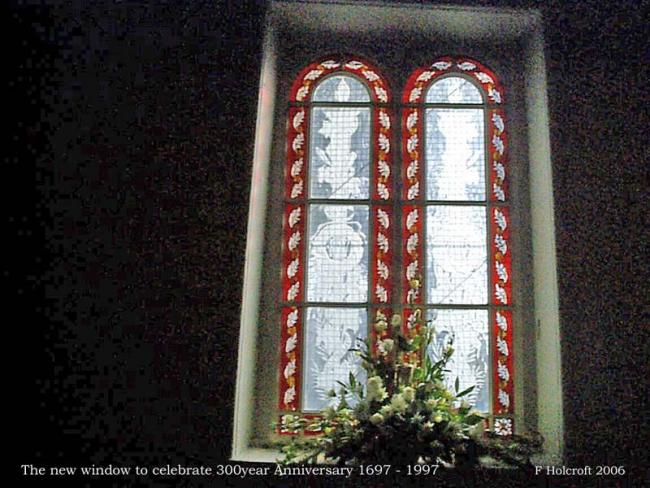 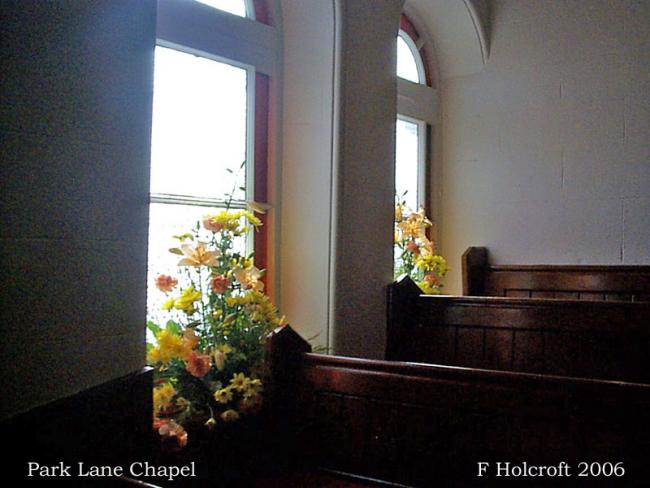 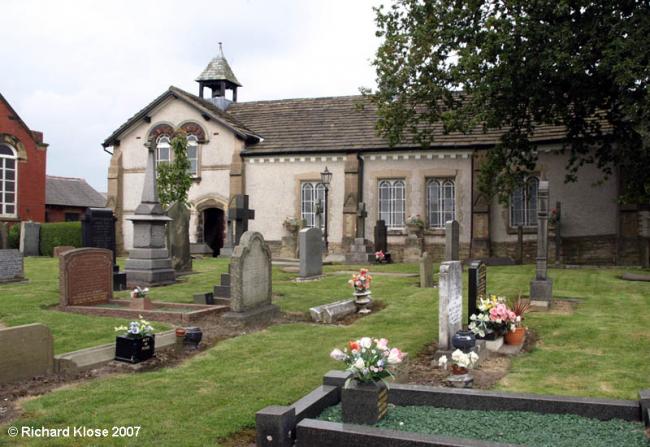 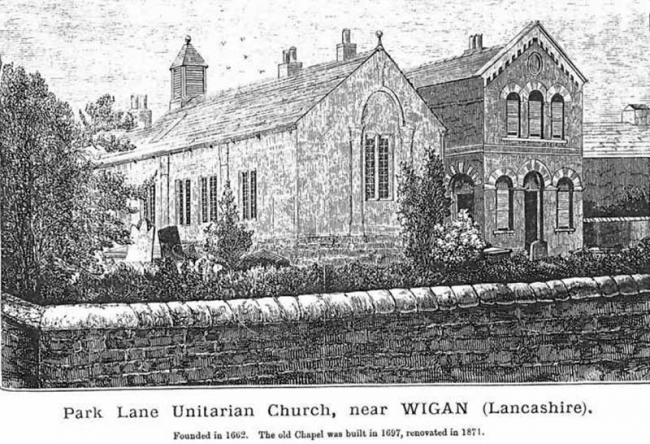 A book "The History of Park Lane Chapel" 1697 - 1897 was written by Rev. George Fox, it is valuable for information on local history, as well as an insight into life 100 years ago. There is a copy of this book in local libraries (but can only be read in the library Reference Room).

The church has/ a graveyard.

This ancient Chapel dates back to 1697, though 1662 is the year which saw the birth of its congregation. It is the oldest Non-conformist Chapel building and congregation in the district. At the time of the passing of the Act of Uniformity, the Rev. James Wood "an indefatigably laborious man" was in charge of Ashton Chapel (St. Thomas's Church). He refused to conform.Whether actually ejected from his living as a consequence is not quite clear.However, he was no longer "preacher of the Word at Ashton-in -Makerfield," an ancient Chapelry in the parish of Winwick, though he maintained friendly contact with members of his late congregation, several of whom were apparently in sympathy with his views. He also met them for private prayer and preaching. In 1663 he left Ashton for Thelwall, near Warrington, but frequently returned.He. died in 1666-7. His friends scattered throughout Ashton continued to meet together and eventually congregated in the large room of a thatched cottage, "The Nook" (dismantled about 1830), sited somewhere near the present Chapel. Here they "worshipped God according to their consciences."

In 1695 they had as leader, the Rev. Thomas Blinston, who'also served other groups in the neighbourhood. Ultimately the congregation at "The Nook" felt not only the desire for, but also the ability to build a Chapel. They were not rich folk nor were they numerous, so whilst some contributed from their sparse means, others loaned their horses and carts, and others again gave their labour. And an admirably strong job they made' of it as was proved when repairs. were necessary owing to mining subsidence, from which it has suffered much. No date is on record of when the building was actually opened for worship, but other available evidence points to the year 1697.

The first Chapel Trust Deed is dated 1704 and refers to the building simply as "The Park Lane Chapel," the name "Chapel," instead of "Meeting House," like the possession of a Bell, being due to the congregation's earliest connections, and "Park Lane" being the name of a small portion of the main road from Wigan to Warrington by the side of which it is situated. It was "to be used for a congregation of Protestants dissenting from the Church of England." The specific doctrinal position of the members is not recorded but, no doubt, it followed that of the English Presbyterians with whom they were connected and it made a continued progress towards the Unitarian one. In 1809, the Rev. Thomas Broadbent, who had been minister for nine years, chanced preaching a good Unitarian sermon and, at its end, descended the pulpit fearful of the consequences. To his surprise he was warmly commended, especially by the acting trustee, who forthrightly exclaimed, "That's the right sort of stuff, give us some more of it!" As a later observer put it, "the congregation, if anything, were in advance of their pastor." However, in 1854, the Chapel had been duly registered as a "place of meeting for religious worship by a congregation or assembly of Protestant Dissenters from the Church of England of the denomination called Unitarians." The members of this Chapel still remain Unitarian and are characterised by demanding no credal or dogmatic tests as to religious belief. They hold dear the freedom to think of God, to search for Him and to worship Him according to the promptings of their own conscience. "We unite for the Worship of God and the Service of Man in the Spirit of Jesus Christ," is a concise statement of their religious purpose and aim. The Sunday School attached to the Chapel was begun in 1813 and was originally housed in a two-storied building standing alongside the North wall of the Chapel. The present School buildings were erected in 1902. Even though these premises are no longer used as a school, they are still part of the Chapel estate, and are regularly used by adults and children of the Chapel.

Over quite a period the congregational singing was accompanied by a flute, a clarionet and a bassoon, augmented at the School Sermons by the School Band, the only one of its kind in the district at that time and which later became the band of the Lancashire Hussars. Then harmoniums of one kind and another, varying in size and power, were obtained, until in 1950 a pipe organ was installed, of dimensions and strength in keeping with the compactness and dignity of the Chapel.

This old Chapel has been faithfully and loyally served by all its ministers whose names and years of service are recorded on tablets fixed to the North wall. During its long life it has produced and nurtured many sturdy characters who in their day served their Chapel and the district in many varied and acceptable ways. There is much to interest the visitor in the interior of the Chapel. The Chapel originally had boxpews, and when restoration work was carried out in the 1870's, the doors from these pews were made into panels along the walls, where carved initials and the date 1697 can be seen.

In more recent times: 1997 a new window was installed to mark the Tercentenary. The design is based on the Unitarian symbol of the Chalice. 2003 the Chapel roof was refurbished and the bell restored. The Chapel is a listed building, and English Heritage have been involved in this work. 2004 the ceiling and walls were re-plastered where necessary, using the recommended lime plaster with hair - as in the original structure.

The presbyterian Chapel in Park Lane in Ashton in Makerfield, in the Parish of Winwick & County Palatine of Lancaster was completed in the year 1697, in the latter part of the reign of King William of immortal memory. It was built on land previously purchased by the remainder of the descendants of those presbyterians who suffered so severely by the Black Bartholemew Act in 1662 under the reign of the profligate Charles 2nd. The first minister of Park Lane Chape, was the Revd. Thomas Blinston".