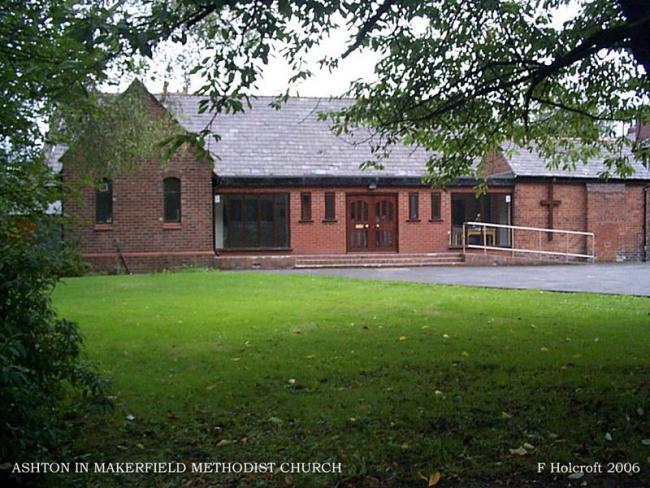 The Church Society was formed in 1902. The meetings were held in a small room over a stable at the rear of Wigan Road and Pretoria Road. Early records show a membership of 14 and the first baptism recorded was on October 20th, 1902.

The foundation stone of the present church was laid on August 14th 1905 by a Mr J.T. Kewish, a Manx man who came to live and work in Ashton. The original building consisted of a large hall with a glass partition to the rear which could be moved to form either one large classroom or two small ones. Originally there were no pews; long forms across the centre of the church and smaller ones at each side was the layout giving two side aisles. Pews were installed in the 1940s.

Beneath the present vestry was a cellar which contained the old coke boiler; the main source of heating. The church caretaker, Thomas Alfred Sandercock, nursed the old boiler and its eventual replacement. The coke boiler was later taken out of service and the cellar filled in.

The pipe organ was installed sometime after the 1914-1918 war and installed in memory of John Edmondson, the first church secretary and also of Frank Edmondson and John Pickering. The two latter young men, both church members, had been killed in the war. At that time there was no electricity in the church so the organ had to be pumped manually. A boy or a young man would sit behind a curtain on the vestry side of the organ and he was the official organ blower. He received sixpence (2.5p) for his work each Sunday and in those days there were two services, morning and evening. The communion table and rail were installed in the church in 1936.

Following World War II alterations and additions took place. A new kitchen was added at the rear/side of the chapel and the forms replaced by pews when some second-hand pews were obtained from a church in the Wigan area which was closing down. New carpets were laid in the aisle (now just a centre aisle) and the heating and lighting changed to electricity.

By 1976-7 it was felt that further alterations were needed to cater for an ever-growing Sunday School. Better kitchen and toilet facilities were completed and then church, as it now stands, was reopened on 13th October 1979.