ASTLEY, orEast Leigh, a township-chapelry in Leigh parish, Lancashire; near the Bridgewater canal and the Manchester and Liverpool railway, 8½ miles W of Manchester. It has a station on the railway, and a post office under Manchester. Acres, 2,628. Real property, £11,967,-of which £5,000 are in mines. Pop., 2,109. Houses, 437. There are collieries and a large cotton mill. The living is a vicarage in the diocese of Manchester. Value, £250.* Patron, the Vicar of Leigh. The church is modern, and has been thrice enlarged There are a Wesleyan chapel, a free grammar school, a national school, and some small charities.

Details about the census records, and indexes for Astley.

The Register Office covering the Astley area is Wigan & Leigh.

You can see pictures of Astley which are provided by:

"ASTLEY, (or East Leigh), a chapelry in the parish of Leigh, hundred of West Derby, in the county palatine of Lancaster, 3 miles to the E. of Leigh. It is a station on the North Western railway; and the Leigh branch of the Bridgwater canal, which joins the Leeds and Liverpool canal at Wigan, passes near the village. The living is a perpetual curacy in the diocese of Manchester, of the value of £250, in the patronage of the Vicar of Leigh. The church is dedicated to St. Stephen, and occupies the site of a more ancient one. There is an endowment founded by Adam Mort in 1630, for the instruction of children in this and other townships. There is also a free school, with an endowment of £26 a year, and several other charities, amounting altogether to £150. Many of the inhabitants are employed in the fustian manufacture. In 1849, a highly interesting and successful experiment was made here of extinguishing a fire in one of the mines, by Mr. Gurney's method of forcing a current of artificial "choke-damp " through the mine.

In 1835 Astley was a township in the parish of Leigh.

You can see the administrative areas in which Astley has been placed at times in the past. Select one to see a link to a map of that particular area. 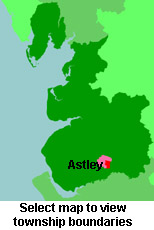 View maps of Astley and places within its boundaries.