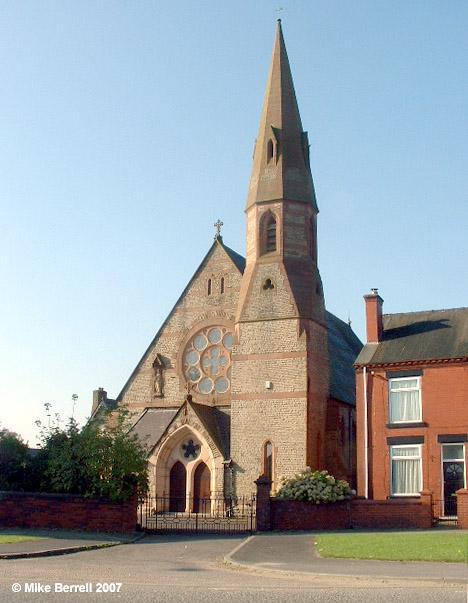 The Church of the Sacred Heart at Hindsford, Atherton, in the Liverpool Archdiocese was opened in 1869. It was built to serve the Catholics of Hindsford, Tyldesley, Atherton, Boothstown and Astley. Prior to that date the nearest Catholic church was St Joseph, Leigh.The first Parish Priest was Father Dawber, who, from 1865, said Mass in a loft above a stable behind the Star and Garter Hotel, Tyldesley. He was followed by Father James Lennon who sought almost in vain for a site for a Church fairly central for Boothstown, Tyldesley and Atherton until a site was given in Hindsford by Lord Lilford, enabling work to start on the 400-seat Church of the Sacred Heart in 1868. Father Richard Joseph O'Neill was sent as curate and later succeeded Father Lennon as Parish Priest. The site of St Richard's in Mayfield Street, Atherton was obtained by Father O'Neill in 1889 and a school-chapel was erected. Father Andrew Flynn, assistant priest at Hindsford, moved to Mayfield Street and became the first parish priest of Atherton in 1894. The current church of St Richard's, Atherton was built by Father T. Almond in 1928. As the local Catholic congregation grew another new parish, Holy Family, was formed in Boothstown in 1897, but it was not until 1930 that the present Boothstown church was built. St. Gabriel's parish in Higher Folds was formed in 1956 and St Ambrose Barlow parish in Astley was formed in 1965, the new church there being built as recently as 1981. In 2005 the five parishes that had started as one in Tyldesley in 1865 were brought back together as one community under the patronage of Saint Margaret Clitherow. Although the church at Hindsford closed in 2004 (following discussions within the parish and despite the listing of the buildings as of special architectural importance) the parish community is still very much alive. Community and faith services are organised at significant times in the liturgical calendar, such as Christmas, Easter and the Feast of the Sacred Heart. They are held in the churchyard or the parish centre, depending on the weather.