BARROW, or Barrow-in-Furness, a seaport town and two chapelries in Dalton-in-Furness parish, Lancashire. The town stands at the terminus of a branch of the Furness railway, opposite Walney Island, 8 miles SW of Ulverston; was only a village, with a pop. of 325, so late as 1847; rose to a pop. of about 2,000 in 1847, and to a pop. of more than 12,000 in 1868; owed its rise mainly to rapid development of mineral wealth in its vicinity; began, in 1867, to acquire a grand artificial harbour, with docks and wharves, estimated to cost about £300,000; imports large quantities of timber and coal; has a long range of blast furnaces, extensive foundries, and steel-works, large timber-yards, ship-building yards, and saw-mills: draws from neighbouring mines about 400,000 tons of iron ore a year; produces about 4,000 tons of pig-iron weekly; converts about one-fifth of that quantity into steel by the Bessemer process; exports, in addition to its iron produce, about 3,000 tons of copper ore and about 20,000 tons of slate a year; is built on a regular plan, chiefly with streets crossing at right angles; and has a head post office, a fine new r. station with telegraph, a spacious town hall and market house built in 1865, an assembly-room, a temperance hall, a subscription newsroom and library, a mechanics' institute, a police office, a custom-house, a church in the geometric style built in 1859, another church built in 1867, an Independent chapel in the early English style, a Wesleyan chapel of 1863, a Welsh chapel of 1864, a Roman Catholic chapel of 1866, and a national school. The chapelries are St. George and St. James, and were constituted, the former in 1863, the latter in 1867. The livings are p. curacies in the diocese of Carlisle. Value of St. G., £149.* of St. J., £150. Patron of St. G., the Duke of Devonshire; of St. J., Trustees.

There have only ever been three burial grounds within the Borough of Barrow, namely the Municipal Cemetery on Devonshire Road, opened in 1873 [previously most burials had to go to Dalton] and for persons on the fringes of the borough the churchyards of St. Michael's, Rampside, and St. Mary the Virgin, Walney Island.

Details about the census records, and indexes for Barrow in Furness.

You can see pictures of Barrow-in-Furness which are provided by:

"RAMPSIDE, (or Ramsyde), a township and chapelry in the parish of Dalton-in-Furness, hundred of Lonsdale North of the Sands, county Lancaster, 5 miles S.E. of Dalton. It is situated on Morecambe Bay, near the Lancashire and Yorkshire railway, and opposite Walney Island. The living is a perpetual curacy in the diocese of Carlisle, value £105, in the patronage of the Vicar of Dalton. The church is of some antiquity. There is a National school.

"BARROW-IN-FURNESS, a village and chapelry in the parish of Dalton-in-Furness, in the county of Lancaster. The living is a perpetual curacy, value £140, in the patronage of the Duke of Devonshire."

RAMPSIDE, a village and a chapelry in Dalton-in-Furness parish, Lancashire. The village stands on the coast, 1 mile N N E of Peel r. station, and 5¼ S by E of Dalton; consists of a few scattered dwellings; is coming into some repute as a watering-place; and has a post-office under Ulverstone, and an inn. The chapelry has no defined limits. The living is a p. curacy in the diocese of Carlisle. Value, £105* Patron, the Vicar of Dalton. The church is old but good; and there is a national school.

In 1835 Barrow comprised just two wooden jetties, ten or a dozen cottages and two public houses [Baines' History of Lancashire], but by 1882 had a population of 47,000. Before it's rapid growth it was just part of the parish of Dalton in Furness.

You can see the administrative areas in which Barrow-in-Furness has been placed at times in the past. Select one to see a link to a map of that particular area. 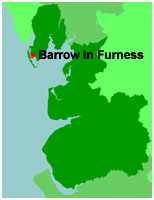 View maps of Barrow-in-Furness and places within its boundaries.

The Workhouse site has an interesting description of Barrow workhouse.