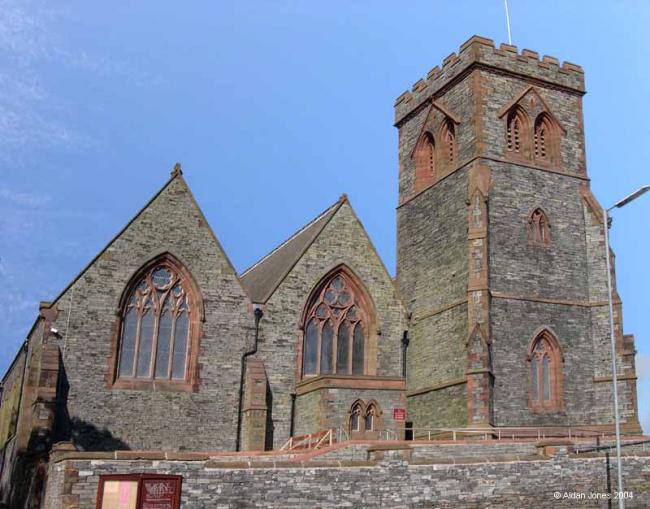 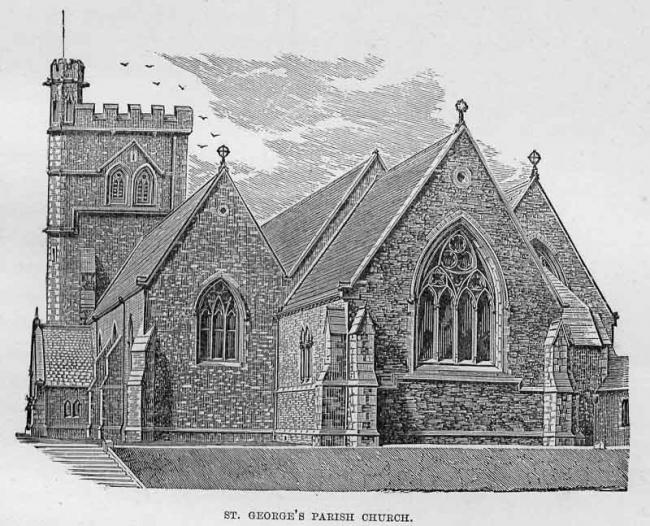 St. George's Church,.-Previous to the year 1871 Barrow formed an ecclesiastical district within the extensive parish of Dalton, and was dependent on that Church.   In that year the town, with a certain radius around, was constituted a separate parish, and St. George's was then exalted to the dignity of parochial church. Its erection took place in 1859-60, and was chiefly due to the liberality of the Dukes of Devonshire and Buccleuch.   The church occupies a slight eminence at the junction of Church Street and Salthouse Road. The style adopted in its construction is the Geometric Gothic, and a very pleasing effect has been produced by the use of Kirkby slate, with red sandstone dressings.   The church consists of a nave, 75 feet long, north and south aisles, chancel, and a somewhat massive tower, 65 feet high.   A moulded arch separates the chancel from the nave, and down each side is a row of pillars, with richly-carved capitals carrying moulded arches.   The interior is spacious and chastely decorated, and the east window is filled with richly-stained glass.   There are about 1,000 sittings, all of which are free and unappropriated.   The living is a vicarage, worth about £306, and is in the patronage of trustees.   The present incumbent is the Rev. A. B. Crosse, M.A., who is assisted by the Rev. C. W. Barnard, B.A., as curate.   Near the church is the manse, a substantial stone building of the same style, and in general harmony with that edifice. The School was erected in 1850, and is situated in close proximity to the church.   It was enlarged in 1863, and consists of two departments-Senior Mixed and Infants.   The total accommodation is about 300.   The senior school is under the care of Mr. Hill, and the infant department under Miss Gidlow.

The earliest wholly purpose-built Anglican church in the new town of Barrow, built 1859-60 and consecrated 4 January 1861. Originally within the parish of Dalton-in-Furness, it became an independent parish in 1872. Prior to the construction of St George's Church, the nearby St George's School and Mechanics Institute, which had been erected in 1849 on land donated by the Furness Railway Company, was licensed for divine worship in 1852, under the curacy of the Rev. W Llewelyn Croft.