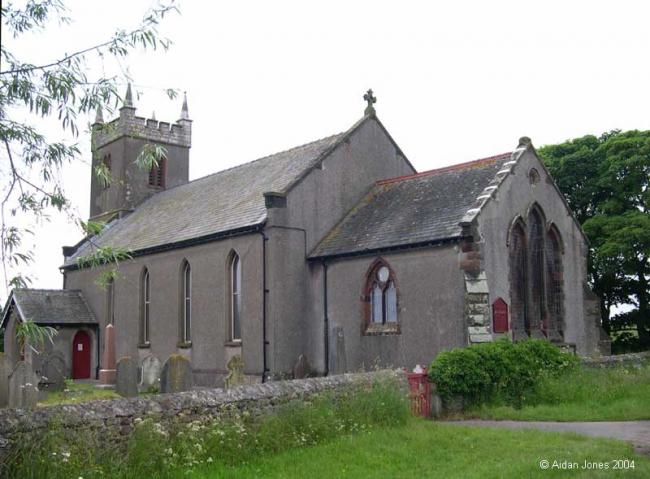 Formerly a chapelry within Dalton parish. An earlier church had a foundation stone 1621, but there have been previous buildings as well. Replaced by the present building in 1840. Further information about the church.

Rampside is delightfully situated near the entrance to Piel Harbour. About a mile from the village stands the church, a neat structure, rebuilt in 1840, in the perpendicular Gothic style of architecture.   It is situated on an eminence, and can be seen far out upon the bay. The living, worth £110, is a perpetual curacy in the incumbency of the Rev. Theodore S. Uglow, M.A., Dublin, and in the patronage of the vicar of Dalton.   The foundation stone of the old building bore the date 1621, but it is probable that a chapel occupied the spot previous to that year.   Beneath the foundations were found quantities of human bones ; it must, therefore, have been a place of sepulture at an earlier period; and as these were always associated with ecclesiastical edifices, we may infer that such was the case in the present instance, and that a church stood near the spot soon after the Reformation. In 1650 it was reported by the Parliamentary Commissioners as having neither minister nor any endowments to maintain one.   George Fox, the founder of the Society of Friends, visited the village in 1652.   In his journal he says :-" I passed to Rampside, where was a chapel, in which Thomas Lawson used to preach, who was an eminent priest.   He very lovingly acquainted the people in the morning of my coming in the afternoon, by which means many were gathered together."   Lawson afterwards resigned his cure and joined the Friends.