BLACKBURN, a town, a township, a parish, a subdistrict, a district, and a hundred in Lancashire. The town stands on the river Blackwater, 9 miles E by S of Preston, and 12½ N by W of Bolton. The Leeds and Liverpool canal passes through it; and railways go from it N, S, E, and W. The country around it possesses little scenic interest, yet is sheltered by hills on the NE and NW; and it lay for ages wild and barren, but has been much improved by cultivation. The town is large; was very prosperous up to the juncture of the cotton distress in 1862; and has owed most of its importance to modern manufactures. Cottonmills and print works are numerous, and employ a large proportion of the inhabitants. The value of cotton goods produced prior to 1862 exceeded £2,000,000 a year. The cotton-spinning was much advanced by an invention of James Hargrave, a native, originally a carpenter; and the cotton-printing was introduced by the family of Sir Robert Peel. Some woollen cloth also is made; considerable industry is carried on in breweries, foundries, and machine-works, particularly in the manufacture of weaving-machinery; and much business is done in connexion with neighbouring factories, corn mills, paper-mills, and collieries. Weekly markets are held on Wednesday and Saturday; and fairs on the Wednesday before 2 Feb., on every alternate Wednesday thence till Michaelmas, and on Easter Monday, 11 and 12 May, 29 Sept., and 17 Oct. The town has a head post office, a telegraph station, four banking offices, and three chief inns; and publishes four weekly newspapers. It is a seat of courts. and a polling-place; it was constituted, by the act of 1832, a parliamentary borough sending two members to parliament; and it was made municipal in 1851, with government by a mayor, twelve aldermen, and thirty-six councillors. Acres, 3,610. Real property, in 1860, £170,703. Direct taxes, in 1857, £26,354. Electors in 1868, 1,894. Pop. in 1841, 36,629; in 1861, 63,126. Houses, 11,306.

Details about the census records, and indexes for Blackburn.

The following items have been produced by the LFH&HS.

The Register Office covering the Blackburn area is Blackburn.

You can see pictures of Blackburn which are provided by:

"WENSLEY-FOLD, a township in the parish of Blackburn, county Lancaster, 2 miles N. of Blackburn. It is bounded on the S. by the river Derwent."

You can see the administrative areas in which Blackburn has been placed at times in the past. Select one to see a link to a map of that particular area. 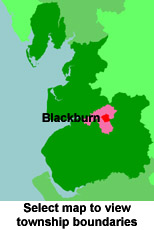 View maps of Blackburn and places within its boundaries.

The Workhouse site has an interesting description of Blackburn workhouse.