Monumental inscriptions for the parish church, St John (which no longer has a graveyard), Holy Trinity, and the Bethesda Chapel have been published by the LFH&HS.

Details about the census records, and indexes for Blackpool.

Churches in 1918 from the Blackpool Gazette News Year Book.

The Register Office covering the Blackpool area is Blackpool & Fylde.

You can see pictures of Blackpool which are provided by:

"Blackpool, 4 miles south-west of Poulton, in the parish of Bispham, is a celebrated bathing place on the coast of the Irish sea. The peaty coloured pool, which gives name to the place is at the south-end of Blackpool, near the house called Fox Hall, once the residence of the TYLDESLEYs, but now a farm house. The firm and smooth sand renders the operation of bathing very safe and agreeable, which is regulated here with peculiar and rigorous attention to decency. For the accommodation and recreation of visitors and the respectable inhabitants, there are the news and coffee rooms, a library; and at the hotels, during the season, assemblies are given. In 1821 an episcopal chapel was erected here, subject to the parochial jurisdiction of Bispham. About 800 inhabitants form the population of Blackpool, exclusive of visitors."

BLACKPOOL, a chapelry and bathing-place, in the parish of BISPHAM, hundred of AMOUNDERNESS, county palatine of LANCASTER, 4 miles (S.W.by W.) from Poulton, and 25 (S.W. by W.) from Lancaster, containing 800 resident inhabitants. The living is a perpetual curacy, in the archdeaconry of Richmond, and diocese of Chester, endowed with £600 private benefaction, and £1700 parliamentary grant, and in the patronage of P. Hesketh, Esq. The chapel was built in 1821, at an expense of £1150, and the Incorporated Society for the enlargement of churches and chapels granted £200 for defraying the expense of a greater number of sittings. Blackpool, which acquired its name from a boggy pool at the southern end of the village, was, until within the last eighty years, an inconsiderable place; but, owing to its eligibility for bathing, it is now frequented every summer by a crowd of visitors, for whose accommodation commodious hotels and lodging-houses have been erected. The beach slopes gently from the site of the houses; the sands are smooth and firm; and the air is highly salubrious. The parade forms an agreeable promenade, from which there is an extensive view of the fells in Westmorland and Cumberland, and the mountains in North Wales. Excellent regulations have been introduced for the convenience of bathers; a news-room and library have been established, a theatre erected, and assemblies are occasionally held at the different hotels. Every alternate Sunday during the season the inhabitants of the surrounding district assemble at Lane End, and join in various rustic sports. The sea appears to have encroached considerably on the shore; a large, stone, called Penny-stone, lying on the sands, about half a mile from the shore, is stated by tradition to mark the site on which a public-house formerly stood. A free school was established in 1817, which is conducted on Dr. Bell's plan.

Blackpool is a relatively new town which grew up with the fashion to go to the seaside, and take the waters. It's parish church, St.John, was built in 1820. The town of Blackpool was built in the area that was previously the townships of Layton with Warbreck and Bispham with Norbreck in the parish of Bispham, and the township of Marton in the parish of Poulton le Fylde.

You can see the administrative areas in which Blackpool has been placed at times in the past. Select one to see a link to a map of that particular area.

A chronology of significant events in Blackpool's history. 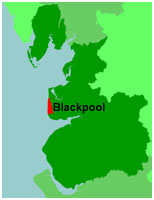 View maps of Blackpool and places within its boundaries.