Marton has now been swallowed up by Blackpool, which grew into a large town by the end of the 19th century.

Details about the census records, and indexes for Marton.

The Register Office covering the Marton area is Blackpool & Fylde.

You can see pictures of Marton which are provided by:

"GREAT and LITTLE MARTON, townships in the parish of Poulton-le-Fylde, hundred of Amounderness, county Lancaster, 5 miles S.E. of the Blackpool railway station, its post town, and 5 N.W. of Kirkham. It is situated on the coast of the Irish Sea, and near Marton-Mere. The village, which is considerable, is wholly agricultural. The soil is of various character, but generally fertile. The living is a perpetual curacy in the diocese of Manchester, value £120. The church, dedicated to St. Paul, is a neat brick structure, erected in 1804. It has recently been enlarged, and a new tower added. There are numerous small charities. A free school for both sexes was founded in 1717 by James Baines, who endowed it with land, producing £100 a-year. It is now united with the National school, in which building a Sunday-school is also held. John Talbot Clifton is lord of the manor, and sole landowner of Little Marton.

In 1835 Marton was a township in the parish of Poulton le Fylde.

You can see the administrative areas in which Marton has been placed at times in the past. Select one to see a link to a map of that particular area. 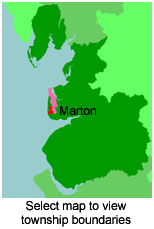 View maps of Marton and places within its boundaries.