BLATCHINWORTH, a township and a subdistrict in the district of Rochdale, Lancashire. The township bears the name of Blatchinworth-with-Calderbrook; lies on the Manchester and Leeds railway, 5 miles NE of Rochdale; contains seven hamlets and Littleborough village, the last with a post office under Manchester and a r. station; and has romantic scenery., numerous good residences, a church, five dissenting chapels, an endowed school, eight cotton mills, twelve woollen mills, two collieries, and rich quarries. Real property, £14,551; of which £1,020 are in mines. Pop., 4,860. Houses, 980. The subdistrict is conterminate with the township.

Details about the census records, and indexes for Blatchinworth and Calderbrook.

The Register Office covering the Blatchinworth and Calderbrook area is Rochdale.

You can see pictures of Blatchinworth & Calderbrook which are provided by:

"BLATCHINWORTH, a joint township with Calderbrook, in the parish of Rochdale, and hundred of Salford, in the county palatine of Lancaster, 4 miles to the N.E. of Rochdale. The Manchester and Leeds section of the Lancashire and Yorkshire railway passes through it, with a station at Littleborough, a village included in the township. The inhabitants are employed in the woollen manufactories, the printworks, and the numerous collieries.

CALDERBROOK, a joint township with Blatchinworth in the parish of Rochdale, hundred of Salford, in the county palatine of Lancaster, 4 miles to the N.E. of Rochdale."

"LITTLEBOROUGH, a chapelry in the parish of Rochdale, and township of Blatchinworth, county Lancaster, 3½ miles N.E. of Rochdale. It is a station on the eastern section of the Lancashire and Yorkshire railway, which passes a little to the E. of the village, and then enters a tunnel of 2,869 yards in length. The Rochdale canal and the Roman road from Manchester to York traverse the district. The living is a perpetual curacy in the diocese of Manchester, value £200, in the patronage of the Vicar of Rochdale. The church, dedicated to St. James, formerly belonged to Whalley Abbey, but was rebuilt about 1815. There is a place of worship for Wesleyans. Many Roman antiquities have been found in the immediate vicinity."

LITTLEBOROUGH, a village and a chapelry in Rochdale parish, Lancashire. The village stands on the river Roch, the Rochdale canal, the Lancashire and Yorkshire railway, and the Roman road to York, at the foot of Blackstone-Edge, 3 miles NE of Rochdale; is supposed, from its position on the Roman road, and from the discovery of some Roman antiquities in its neighbourhood, to stand on or near the site of a Roman station; is a large place sharing in the manufactures of Rochdale, and practically a suburb of that town; and has a railway station with telegraph, and a post office under Manchester. The chapelry contains also the hamlets of Gale, Shore, Durn, Featherstall, Rake, Chelburn, Smithy Bridge, Calder Brook, Summit, Whitelees, Laneside, and Sladen. Pop. in 1861, 4,860. Much of the surface is a fine valley, gemmed with mansions and villas. The living is a vicarage in the diocese of Manchester. Value, £300.* Patron, the Vicar of Rochdale. The church succeeded modern edifice; and consists of nave, with tower and spire. There are chapels for Wesleyans, United Free Methodists, and others, an endowed school, and a national school.

In 1835 Blatchinworth and Calderbrook was a township in the parish of Rochdale.

You can see the administrative areas in which Blatchinworth & Calderbrook has been placed at times in the past. Select one to see a link to a map of that particular area. 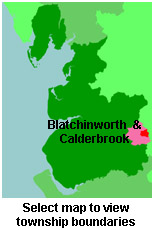 View maps of Calderbrook and places within its boundaries.