There is more than one Bolton in Lancashire. This is the main one, nowadays just referred to as Bolton, and was also known as Bolton-le-Moors.

BOLTON-LE-MOORS, a parish in the districts of Bolton, Wigan, and Chorley, Lancashire. It centres in the Post Town of Bolton; and contains the townships of Great Bolton, Little Bolton, Sharples, Quarlton, Edgeworth, Entwistle, Longworth, Turton, Bradshaw, Haulgh, Tonge, Breightmet, Harwood, Lostock, Darcy-Lever, Blackrod, Anglezarke, and Rivington, and the chapelry of Little Lever. Acres, 30,062. Real property, £332,547; of which £29,356 are in mines, and £1,969 in quarries. Pop. in 1841, 73,905; in 1861, 97,215. Houses, 18,385. The living is a vicarage in the diocese of Manchester. Value, £350.* Patron, the Bishop of Manchester. The vicarages of Holy Trinity, St. George, Christ Church, and St. John, and the p. curacies of All Saints, Emmanuel, St. Mark, and St. Paul, within the borough of Bolton, are separate benefices. Value of Holy Trinity, St. George, Christ Church, and St. John, each £300; of Emmanuel, £300;* of St. Mark, £160; of St. Paul, £150; of All Saints, £128. Patron of H. T., the Bishop of Manchester; of St. G. and E., the Vicar of Bolton; and of St. J., alternately the Crown and the Bishop; of A. S., T. Tipping, Esq.; of St. M. and St. P., Trustees. The vicarages of Astley-Bridge, Belmont, Blackrod, Bradshaw, Little Lever, and Lever Bridge, and the p. curacies of Harwood, Rivington, Tonge, Turton, and Walmsley also are separate benefices. See the articles on these places and Bolton.

Details about the census records, and indexes for Bolton.

A considerable number of church records have been published by the Bolton branch of the Manchester & Lancashire FHS.

The Register Office covering the Bolton area is Bolton.

Bolton Metropolitan Borough Council provide a range of information about the town.

The Bolton website has a range of pictures and information about the town.

You can see pictures of Bolton which are provided by:

"THE OAKS, a railway station on the western section of the Lancashire and Yorkshire line. It is the first station after leaving Bolton."

You can see the administrative areas in which Bolton has been placed at times in the past. Select one to see a link to a map of that particular area.

The history of Bolton from Pigot's Lancashire directory, 1830.

Some more information about the history of Bolton. 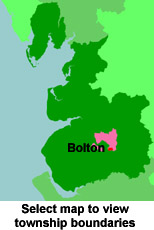 View maps of Bolton and places within its boundaries.

The Workhouse site has an interesting description of Bolton workhouse.

Bolton and District Family History Society, is a branch of the Manchester & Lancashire FHS.