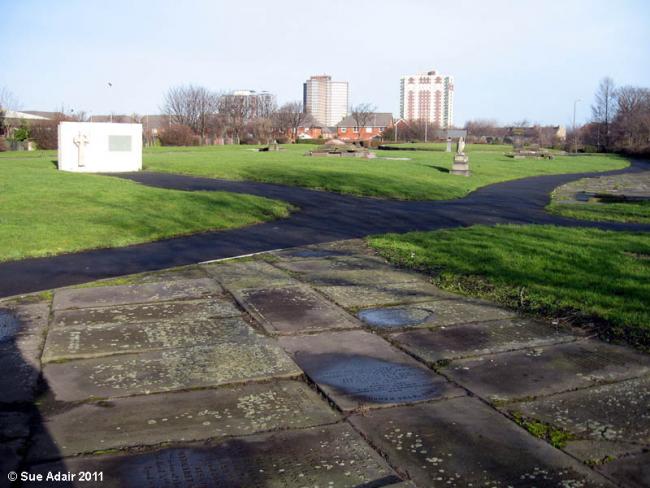 St. Mary's Churchyard, once '...the borough's biggest burial ground' had become derelict after the bombing of the church in 1940. In Sep 1961 it was opened as a Garden of Rest by the Bishop of Liverpool. Some details of what became the graves there are given in the volume 'Bootle: newscuttings, 1958 - 1970', volume 3, Liverpool Record Office Local Studies Collection reference4 Hq 942.729 BOO.

It was founded in 1827. It is now closed and has been demolished, but we do not know the date of closure.

St. Mary's, parish church for Bootle, was consecrated in July 1827 and its first incumbent was a member of the Gladstone family. The 'substantial Church' was built at the expense of the '...eccentric but capable' William Spurstow Miller, described in the Directories as an Attorney of Bootle, who had also built himself a castellated house on the Bootle Shore, known as 'Millers Castle' subsequently demolished to make way for dock expansion. St. Mary's Church and churchyard were situated on Church Street, at an angle between the present Strand Road and Irlam Road, leading into Merton Road, not far from that part of the shore on which Alexandra Dock opened in 1881. The church was built with town towers, possibly as a navigational aid for shipping approaching the Mersey, but these were replaced at a later date with a spire. Early in the Second World War this spire was seriously damaged when the trailing cable from a barrage balloon became wound around it and the top of the spire dropped through the church roof. In 1940 St. Mary's was wrecked '...by enemy bombs and the resultant fires'. The congregation continued to worship in temporary accommodation and on the 20th March 1949 the Bishop of Liverpool dedicated the '..austerity parish church, the new St. Mary's, Derby Road, Bootle'. The congregation subsequently moved again to premises dedicated in 1981 and the parish is now united with that of the former parish of St. Paul's, North Shore, (St. Paul's, Kirkdale) to form the parish of St. Mary with St. Paul, Bootle (see 'Diocese of Liverpool Year Book, 1996 - 1997, page 51, number 523.).