"MOSSHOUSES-WITH-WAITHAM, an extra parochial place in the hundred of Lonsdale North of the Sands, county Lancaster, near Broughton." 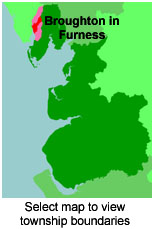