"BURNLEY, a town, a township, four chapelries, a sub-d., and a district in Lancashire. The town stands on the river Burn, immediately above its influx to the West Calder, 22 miles N of Manchester. The Leeds and Liverpool canal is adjacent; and railways go in three directions, toward Skipton, Todmorden, and Blackburn. The town itself is almost wholly modern; has undergone vast increase since the latter part of last century; and owes its character to the rise and enterprize of manufactures. It is built chiefly of freestone; and presents a fair appearance. The town has a head post office, two railway stations, a telegraph office, a banking office, four chief inns, a mechanics' institute, and a public reading room; is a seat of petty sessions and county courts, and a polling-place; and publishes two weekly newspapers. A weekly market is held on Monday; and fairs on 6 March, Easter-Eve, 10 July, and 11 Oct. Woollens were the first great manufacture; but cottons are now the staple. There are three worsted mills, and about thirty cotton mills. There are also calico printing-works, corn mills, iron foundries, brass foundries, machinery-works, rope-walks, tan-works, and breweries. Much trade is carried on likewise from neighbouring collieries and freestone quarries. The town was enfranchised by the reform act of 1867, and sends one member to parliament. Pop. in 1851, 20,828; in 1861, 28,700. Houses, 5,085. The township is of less extent than the town, which extends into the township of Habergham-Eaves. Acres, 1,839. Real property, £71,779; of which £10,136 are in mines. Pop., 19,971. Houses, 3,515."

Details about the census records, and indexes for Burnley.

The Register Office covering the Burnley area is Burnley and Pendle.

You can see pictures of Burnley which are provided by:

"TOWNELEY, a hamlet in the parish of Whalley, county Lancaster, 1 mile S.E. of Burnley. It is a station on the Rose Grove and Todmorden branch of the Lancashire and Yorkshire railway. Towneley Hall, the seat of the Towneleys, is the principal residence."

"ROSE GROVE, in the parish of Whalley, it is a station on the Lancashire and Yorkshire railway, where the Burnley and Todmorden branch turns off, 1½ mile from Burnley."

In 1835 Burnley was a chapelry and township in the parish of Whalley.

You can see the administrative areas in which Burnley has been placed at times in the past. Select one to see a link to a map of that particular area. 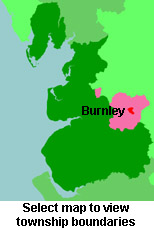 View maps of Burnley and places within its boundaries.

Maps of Burnley East and West around 1890.

The Workhouse site has an interesting description of Burnley workhouse.