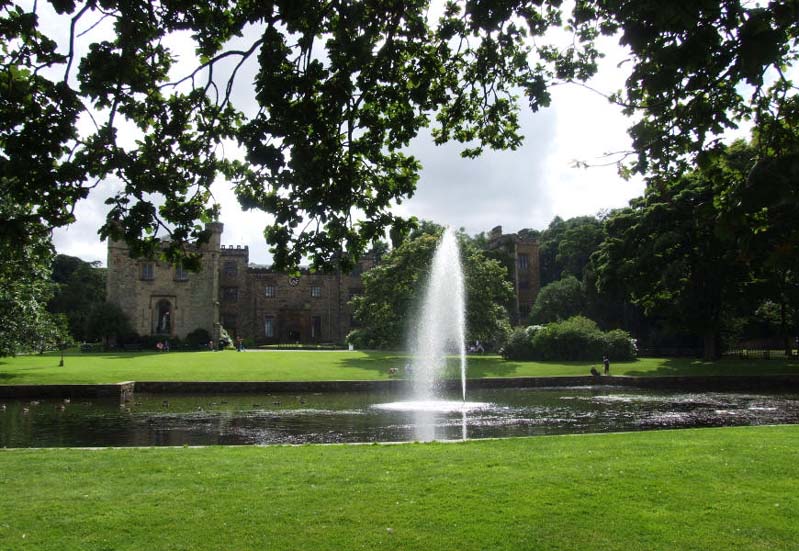 The chief centre of Catholic worship (in Burnley) until modern times was at Towneley Hall. The account given in another chapter of the sufferings of John Towneley during the reign of Elizabeth will show what courage and what endurance were needed to maintain the Mass in those days. The family had kept a private chapel in medieval times, and for centuries they had been connected with Whalley Abbey. Although during Elizabeth's reign the family may have thought it more prudent to attend Mass in their bailiff's house, they seem to have provided for Mass in their chapel, and their house became honeycombed with secret holes and hiding places.

An extraordinarily fascinating document on the ancient hiding places at Towneley was published for the first time in 1923 when Lord Abingdon had forwarded it to the Mayor of Burnley. It had been copied by one of Lord Abingdon's ancestors, a Towneley. The document is probably a unique specimen of penal times, showing how an English gentleman of the seventeenth century was forced to behave like a smuggler and to fill his home with secret dens in order to practise the Catholic Faith. The original was copied about 1700 by Mrs. Towneley and was eventually found in the pocket-book of her grandson.

A NOTE OF THE PRIVATE PLACES AT TOWNELEY

In the chapel the alter table draws out, and also the upper steps, which will let you into a large place, in which may be laid all the guilding, which is only put on with pegs and takes to pieces; care must be taken not to knock the gilding in taking down or putting up.

Over the cannopy of the alter in the library lies a door for the tabernacle, balls for the top of the pillars, instead of the flower pots, and also capitals and bottoms instead of the gilding, so that the place may be made use of though the gilding be taken down.

At the steps going from the stone stairs to the garret a step may be taken out, where there is a large place all over the green parlour. In the second room in the gallery the wainscote opens in the middle of the chimney upon hinges, where there is a hole in the wall not very big.

In the third room in the gallery is the close stool closet, the pannel towards the garden has a latch within, which is opened with an iron pin at a hole in the door, which lifts up the latch, which may be made faster by those within: it has a seat and will hold two persons.

No servant should be trusted with this, but upon some occasion some trusty servant may be made use off for some of the places to be used, but not made acquainted with them all. [Printed in the Burnley Express, August 1, 1923.]

If we examine carefully the descriptions given above, we can see that they refer not only to places where people can hide, as in the last where the man escaping would lift a hidden latch through a hole in the panel, but to hiding-places for library books and altar ornaments or "guilding." The library books would be some of the old treasure from Whalley Abbey and any Catholic books of doctrine or devotion. Altar missals might be included, as well as some of the lovely old vestments which were put up for auction in this present century, when the Towneley estate, one of the most historic in the land, was broken up.

The Catholics of Towneley were of Jacobite sympathies at the time of the 1715 rebellion, as is shown by a register kept by Father Thomas Anderton, who resided almost the whole of his missionary life at Towneley, from 1705 to 1741. Early in the November of 1715 the Scots and North Country rebels were marching in Lancashire. The priest's book for November 1715 records:

It was on this date that the Government forces advanced to meet the rebels at Preston. For the next two days Fr. Anderton prays for the soldiers-no doubt especially for the Burnley men. On the 14th the rebels surrendered. We can see with what fears and anxieties the faithful must have attended Mass during the remainder of the month, when news came through that Richard Towneley and other Burnley men were prisoners.

The Mass for Scotland on St. Andrew's day shows the truly fraternal spirit of the Lancashire Catholics with the Scots supporters of the Stuart cause.

Three Burnley labourers were tried at Liverpool and executed on February 11 at Manchester. Their names were William Harris, Stephen Sagar and Joseph Porter-Stephen Sagar bore the same name as the last abbot of Hayles nearly two centuries before (see a previous chapter).

Richard Towneley and other Lancashire gentlemen were tried in London. Towneley's defence was that he was among the rebels more by accident than design. After half an hour, the jury brought in a verdict of "Not Guilty." Another Catholic, Tyldesley, was acquitted. It has been supposed that they were acquitted because the jury had been horrified by the brutal execution of a young Catholic officer, Colonel Oxburg, the previous day. The revolting mutilation of the living body, the ripping out of entrails, and the hacking-up of the body into quarters like butcher's meat, had proved too revolting a spectacle for the London of 1716.

Undaunted by the failure in 1715, young Francis Towneley, who had lived with the exiled Stuarts in France, returned to Lancashire to raise troops for Bonnie Prince Charlie in 1745. His "Manchester Regiment'' played an important part during the ill-fated but couragous adventure. Towneley was executed in London, but his skull was preserved by the family at Towneley. After being removed to London it was as recently as 1947 buried in the Towneley vault at Burnley.

Several times Towneley Hall had the honour of giving refuge to the priest who administered Catholic affairs in the north of England. Peter Giffard, priest here from 1661 to his death in 1689, was Vicar General of the North. Father Anderton was Archdeacon of Lancashire in 1732, and Fr. George Kendal, also at Towneley for a time, succeeded him in that office.

After a first attempt to build a new chapel to house the growing population in 1814, a further scheme was launched in 1817 to raise money chiefly by subscription and to petition the Bishop for a priest. Some parts of the petition to the Bishop are a touching reminder of the hard conditions of the flock at that time:

We come to you, my Lord, in the name of a congregation which is almost daily increasing from every quarter, particularly from Ireland, to ask for a pastor for a chapel, which, with a convenient house, has been built by subscription for the better accommodation of the poor Catholics of this neighbourhood, who perseveringly endeavour to be present at the service of the Mass, but cannot from the smallness of the present place of worship, and its great distance from the town of Burnley .....

The petition also gives us a picture of the Sunday congregation, unable to attend Vespers or evening service, and even unable to get into the. Towneley chapel during Mass, and so forced to wander about:

Which prevents a great part from attending Vespers, and presents us in no favourable light to other professions by our remaining at home, and it is with the feelings of deepest regret we have to say that, nearly one fourth part of the congregation is deprived of those benefits which arise from the instruction of our worthy pastor. . . . With these considerations, and from seeing a great part of our congregation wandering about during the time of Divine Service, we felt it incumbent on us as Catholics to erect the Altar of God in a Temple which might be sufficiently large to admit our fellow Catholics to join us in offering up our prayers to the Throne of Mercy.

The chief local benefactors of the chapel were Peregrine Towneley (1,000), John Witham (200), Edward Lovat (100), Harry Eastwood (50). The chapel was built on land given by the Towneley family in what was then a country lane, Todmorden Road, at a place called Burnley Wood. When a new and larger St. Mary's was built, the old chapel was moved to become the Assembly rooms of the parish, thus forming an interesting link with the past.

A French exile, Fr. Louis Merlin, had been in charge of the district during these changes, namely from 1811 to his death in 1819. He was buried, like several of the old priests, at St. Peter's, Burnley. He was succeeded at Towneley by a young but ailing priest, Father Charles Lupton. Shortly afterwards Fr. Richard Hodgson went to live in the presbytery and to look after the Catholics of the district, while Fr. Lupton acted as chaplain at Towneley. Fr. Hodgson, who later became a Canon of the Liverpool diocese, laboured here for over 25 years. After Fr. Lupton's death in 1824, Fr. Hodgson took on the Towneley chaplaincy and carried out his missionary task over a wide field. In 1828 he helped to found and conduct a new mission at Sunny Side near Crawshaw-booth from which the Rawtenstall parish grew up.

The Towneleys had the honour of founding at Burnley one of the oldest schools in the diocese. It began as a Sunday school in 1798. Later it became a day school. The loving-kindness with which the Towneleys administered the school is shown by the fact that boys and girls were given new clothes each year to be respectable at Mass. Girls were given green frocks and bonnets, boys had jackets and fustian trousers. About twice a year all the children dined at the Hall with the Towneley family.

In 1845 a priest who became very well known later in the Liverpool diocese as Canon John Worthy came as curate. He helped in the task of building a new and bigger church. As in 1817, a group of laymen, led by Colonel Towneley, worked hard to establish sufficient funds.