"BURROW-WITH-BURROW, a township in Tunstall parish, Lancashire; on the river Lune, 2 miles SE of Kirkby-Lonsdale. Acres, 2,290. Real property, £2,737. Pop., 225. Houses, 38. The Roman station Bremetonacum is thought to have been here; Roman pavements, altars, inscriptions, urns, and coins have been found; and a Roman milestone is on the road. Burrow Hall is the seat of the Parrs."

Details about the census records, and indexes for Burrow with Burrow.

The Register Office covering the Burrow with Burrow area is Lancaster.

You can see pictures of Burrow with Burrow which are provided by:

"BURROW-WITH-BURROW, a township in the parish of Tunstall, hundred of Lonsdale, in the county palatine of Lancaster, 2 miles to the S.E. of Kirkby Lonsdale South of the Sands. It is situated on the river Lune, where the Leek brook falls into it. Numerous Roman remains, consisting of pavements, altars, coins, &c., have been discovered. The township is near the north-eastern extremity of Lancashire, where it adjoins the counties of York and Westmoreland."

In 1835 Burrow with Burrow was a township in the parish of Tunstall.

You can see the administrative areas in which Burrow with Burrow has been placed at times in the past. Select one to see a link to a map of that particular area. 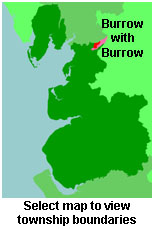 View maps of Nether Burrow and places within its boundaries.