BURSCOUGH, a township-chapelry in Ormskirk parish, Lancashire; on the Leeds and Liverpool canal, and on the Southport and Ormskirk railway, 4 miles NNE of Ormskirk. It includes Burscough-Bridge village; and has two stations, of the names of Burscough Junction and Burscough-Bridge, on the railway, and a post office, of the name of Burscough-Bridge, under Ormskirk. Acres, 4,959. Real property, £12,115. Pop., 2,461. Houses, 478. Many of the inhabitants are employed in the cotton manufacture. A priory of Black canons was founded here, in the time of Richard I., by Robert Fitz-Henry, lord of Chatham, and was the burial-place of the Stanleys, previous to their adoption of Ormskirk; and some remains of the priory still exist. The chapelry bears the name of Burscough-Bridge; and was constituted in 1847. The living is a vicarage in the diocese of Chester. Value, £150. Patron, the Vicar of Ormskirk. The church was built at a cost of £3,246. There are a Wesleyan chapel of 1869, and a national school.

Details about the census records, and indexes for Burscough.

The Register Office covering the Burscough area is West Lancashire

You can see pictures of Burscough which are provided by:

"BURSCOUGH, a township in the parish of Ormskirk, hundred of West Derby, in the county palatine of Lancaster, 4 miles to the N.E. of Ormskirk. It gives name to two stations, Burscough Bridge and Burscough Junction, on the Lancashire and Yorkshire railway. The Leeds and Liverpool canal passes near the town. Burscough was the site of an Augustine priory, founded in the reign of Richard I. by Robert Fitz-Henry, lord of Latham, which had a revenue at the Dissolution of £129. For a long time previous to the Reformation this priory was the burial-place of the Stanley family. Nothing remains of the buildings except a small portion of the conventual church. There is a new church at Burscough Bridge, the living of which is a perpetual curacy, in the gift of the Vicar of Ormskirk. In the vicinity is Latham House, the seat of Lord Skelmersdale, rendered famous in history by the heroic defence made by the Countess of Derby against the parliamentary forces, who besieged it for three months during the Civil War. The inhabitants of the village are chiefly employed in the cotton manufacture."

In 1835 Burscough was a township in the parish of Ormskirk.

You can see the administrative areas in which Burscough has been placed at times in the past. Select one to see a link to a map of that particular area. 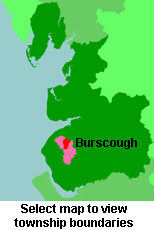 View maps of Burscough and places within its boundaries.