BURY, a township, a town, a parish, two subdistricts, and a district in Lancashire. The township lies all within the town's assigned boundaries. Acres, 2,370. Real property, £263,333,-of which £171,785 are in railways, £1,040 in mines, and £80 in quarries. Pop., in 1841, 20,710: in 1861, 30,397. Houses, 5,971. The town lies on the river Irwell, 2 miles above its confluence with the Roach, and 8 NNW of Manchester. A branch canal goes south-westward to the Manchester and Bolton canal; and railways go westward, northward, eastward, and southward. The town has a head post office, two railway stations with telegraph, two banking offices, several chief inns, a weekly market on Saturday, and three annual fairs; is a seat of petty sessions and county courts, and a polling-place; and publishes four weekly newspapers. Woollen manufacture was formerly the main industry; and is still carried on in several large factories. Cotton manufacture, in various departments, is now the staple; received a great impulse from inventions by two natives, John and Robert Kay, and from the enterprise of the late Sir Robert Peel's father; and maintains at present upwards of twelve factories for spinning and weaving, two for printing and bleaching, and two for dyeing. There are also three large iron foundries, several smaller ones, machine-making works, hat-making houses, and other manufacturing establishments.

Details about the census records, and indexes for Bury.

"From Dr. V. D. Lipman's inspection of the originals of the census returns of 1851, it is clear that the 'synagogues' at Bury, Lutterworth and Haslingden (and one of those at Leeds) were in fact places of worship of a non-Jewish (though perhaps Judaising) sect who called themselves 'Israelites.' "

from Cecil Roth's history of provincial Jewry published in 1940

The Register Office covering the Bury area is Bury.

You can see pictures of Bury which are provided by:

You can see the administrative areas in which Bury has been placed at times in the past. Select one to see a link to a map of that particular area. 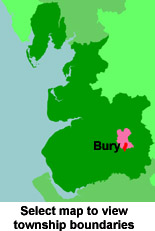 View maps of Bury and places within its boundaries.

The Workhouse site has an interesting description of Bury workhouse.