CARNFORTH, a township in Warton parish, Lancashire; on the Lancaster and Carlisle railway, 6 miles NNE of Lancaster. It has a r. station with telegraph, a post office under Lancaster, six blast furnaces erected in 1865, and an endowed school used as a church. Acres, 1,492. Real property, £2,269. Pop., 393. Houses, 82. A subterranean brook bursts up here, after having run 2 miles under ground from a limestone cavern at Dunald-mill-hole. The Furness and Ulverston railway makes its junction with the Lancaster and Carlisle at Carnforth; and the Furness and Midland, connecting the former with the Little Northwestern, and opened in 1867, goes hence to Wennington.

Details about the census records, and indexes for Carnforth.

The Register Office covering the Carnforth area is Lancaster.

You can see pictures of Carnforth which are provided by:

"CARNFORTH, a township in the parish of Warton, hundred of Lonsdale South of the Sands, in the county palatine of Lancaster, 7 miles to the N. of Lancaster. It is a station on the Lancaster and Carlisle railway, and the point of junction of the Ulverston and Lancaster railway with that line. The Kendal canal passes by this place. There are charitable bequests for the poor, worth about £5 a year."

In 1835 Carnforth was a township in the parish of Warton.

You can see the administrative areas in which Carnforth has been placed at times in the past. Select one to see a link to a map of that particular area. 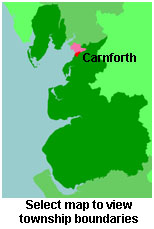 View maps of Carnforth and places within its boundaries.