CARTMEL, a small town, a parish, and a subdistrict in Ulverstone district, Lancashire. The town stands in a fine valley, overhung by the Coniston fells, within 2½ miles of the Leven sands, 2 NE of Cark and Cartmel r. station, and 6½ E of Ulverstone. Egfrid, King of Northumbria, gave the surrounding lands to St. Cuthbert; Ethelred, a successor of Egfrid, put to death here two rivals to his throne; and William Mareschal, Earl of Pembroke, founded here, in 1188, a grand Augustinian priory. The priory enjoyed the privilege of providing guides for the Leven and Morecambe sands; and was given, at the dissolution, to Thomas Holcroft. The church of it still stands; measures 157 feet along the nave and choir, 100 along the transepts; and is now the parish church. The nave was rebuilt in the 15th century; the rest is early English; the choir has an eightlight, transomed, east window; the central steeple exhibits the curious feature of a diagonal belfry on a square basement; and the church contains carved stalls, two ancient monuments of Prior Walton and Sir J. Harrington, and monuments of the Prestons, the Lowthers, and others. The town consists of good stone houses, in narrow irregular streets; and has a post office under Newton-in-Cartmel. It once had a weekly market; and it still has fairs on the Wednesday before Easter, Whit-Monday, the Tuesday after 23 Oct., and 5 Nov. A grammar school has £116 from endowment; and other charities £49. Bishop Law was a native; and was educated in the grammar school. The parish includes also the village of Newton-in-Cartmel; and contains the townships of Cartmel-Fell, Staveley, East Broughton, Upper Allithwaite, Lower Allithwaite, Upper Holker and Lower Holker. Acres, 28,747. Real property, £29,658. Pop., 5,108. Houses, 1,038. The property, in many parts, is much subdivided. Some of the inhabitants are employed in cotton mills. A medicinal spring, called the Holy Well, occurs about 3 miles south of the town and draws numerous visitors. The living is a vicarage in the diocese of Carlisle. Value, £200.* Patron, the Duke of Devonshire. The p. curacies of Cartmel-Fell, Grange, Field-Broughton, Flookburgh, Lindale, Allithwaite, and Staveley are separate benefices. The subdistrict is conterminate with the parish.

Details about the census records, and indexes for Cartmel.

The Register Office covering the Cartmel area is Ulverston.

You can see pictures of Cartmel which are provided by:

"FRITH, a hamlet in the parish of Cartmel, hundred of Lonsdale, county palatine Lancaster, 12 miles N.W. of Lancaster. It is situated near Morecombe Bay, between the rivers Kent and Leven, and is divided into Higher and Lower Frith."

You can see the administrative areas in which Cartmel has been placed at times in the past. Select one to see a link to a map of that particular area. 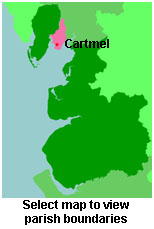 View maps of Cartmel and places within its boundaries.