CASTLETON, a township and two subdistricts in Rochdale parish and district, Lancashire. The township stands on the Rochdale canal and the Manchester and Leeds railway, partly within the borough of Rochdale, partly in the south-eastern suburbs and environs. Real property, £102,077: of which £24,424 are in the canal. Pop. in 1841, 14,279; in 1861, 23,771. Houses, 4,884. The part without the borough includes the villages and hamlets of Buersill, Lowerplace, Newbold, Marland, Lower-Lane, Broad-Lane, Backlanes, Roeacre, Captainfold, Castleton-Moor, and Bluepits. There are traces of a castle, supposed to have been built before the Conquest. The subdistricts are C.-Within and C.-Without; and are jointly conterminate with the township. Pop. of C.Within, 13,971. Houses, 2,892.

Details about the census records, and indexes for Castleton.

The Register Office covering the Castleton area is Rochdale.

You can see pictures of Castleton which are provided by:

"CASTLETON, a township in the parish of Rochdale, hundred of Salford; in the county palatine of Lancaster, 1 mile from Rochdale. It forms part of the south-eastern suburbs, and includes the hamlets of Buersill and Marland., Here was formerly a castle of very ancient date, some vestiges of which still remain. The gas and water-works are situated in this township. The Rochdale canal passes near Castleton. The inhabitants are chiefly employed in the cotton and woollen manufactories."

"BUERSILL, a hamlet in the township of Castleton, and parish of Rochdale, hundred of Salford, in the county palatine of Lancaster, 2 miles from Rochdale. It is near the Rochdale canal."

In 1835 Castleton was a township in the parish of Rochdale.

You can see the administrative areas in which Castleton has been placed at times in the past. Select one to see a link to a map of that particular area. 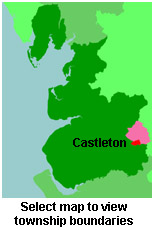 View maps of Castleton and places within its boundaries.