CHADDERTON, a township, two chapelries, and a subdistrict in Oldham district, Lancashire. The township lies on the Oldham railways, the river Irk, and the Rochdale canal, within Oldham borough, and 1 mile ESE of Middleton; and has a post office under Manchester. Acres, 2,978. Real property, £29,797; of which £6,967 are in mines. Pop., 7,486. Houses, 1,503. The property is much subdivided. Chadderton Hall was formerly the seat of the Hortons. Many of the inhabitants are employed in collieries, and in cotton and silk factories. The chapelries are Chadderton-St. John and Chadderton-St. Matthew; were constituted in 1844; and jointly are a little more extensive than the township. The livings are vicarages in the diocese of Manchester. Value, £300 and £300. Patron, alternately the Crown and the Bishop. St. M. 's church was built, at a cost of £1,900, in 1857. There are chapels for Baptists and Wesleyans. The Oldham cemetery also is here. The subdistrict consists of Chadderton and Tonge townships. Acres, 3,345. Pop., 12,092. Houses, 2,456.

Details about the census records, and indexes for Chadderton.

The Register Office covering the Chadderton area is Oldham.

You can see pictures of Chadderton which are provided by:

"CHADDERTON, a township and chapelry in the parish of Prestwich, hundred of Salford, in the county of Lancaster, 4 miles N.W. of Oldham, and 7 from Manchester. It is situated at a short distance from the Middleton station of the Leeds and Manchester railway, which is here intersected by the Leeds and Manchester canal. Here are the fine hills known as Chadderton Heights, and at their foot the old hall of Chadderton, formerly the residence of Sir Watts Horton, Bart., but now the property of Mr. Rheiss, who is related to the noble families of Wilton and Derby; also Fox Denton Hall, the property of the Radcliffes, an old Lancashire family. There are also some handsome modern residences belonging to the wealthy manufacturers of Oldham. The township forms two ecclesiastical districts in the diocese of Manchester, the living of St. John, value £150, and that of St. Matthew, value £150, both perpetual curacies, and in the patronage of the crown and bishop alternately. The latter church is a modern building, and was erected by subscription and contribution. The Wesleyans, at Cow Hill, and the Baptists, at Mills' Hill, have places of worship, together with day, night, and Sunday schools. A cemetery for the borough of Oldham is situated hero. The rivulet Irk rises in the neighbouring township of Royton, runs through Chadderton, and joins the Irwell at Manchester. The inhabitants are chiefly engaged in hand-loom silk weaving, but there are also several coal-minus and cotton-mills. Lawrence Chadderton, the celebrated divine, was born here in A.D. 1536. He was first master of Emanuel College, Cambridge; one of the five divines chosen in the third year of King James L's reign to manage the Puritan cause at the Hampton Court conference, and was named one of the commissioners for translating the Bible. In this township are many traces yet to be seen of the Roman road between Manchester and York, and there is an extensive unexplored tumulus."

In 1835 Chadderton was a township in the parish of Oldham.

You can see the administrative areas in which Chadderton has been placed at times in the past. Select one to see a link to a map of that particular area. 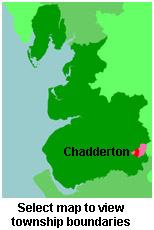 View maps of Chadderton and places within its boundaries.