CHILDWALL, a township in West Derby district and a parish in West Derby and Prescot districts, Lancashire. The township lies adjacent to the Liverpool and Manchester railway, between Broad Green and Roby stations, 4¼ miles E of Liverpool. Acres, 828. Real property, £3,198. Pop., 174. Houses, 25. The parish includes also the townships of Wavertree, Allerton, Garston, Speke, Hale, Halewood, Little Woolton, and Much Woolton; extends from the suburbs of Liverpool, 9 miles up the Mersey; and contains the post offices of Wavertree, Garston, Broad-Green, Woolton, Grassendale, and Halewood under Liverpool, and Hale under Warrington. Acres, 1,327; of which 6,850 are water. Real property, £11, 561. Pop., 1,917. Houses, 3,115. The property is much subdivided. The manor, with Childwall Hall, belongs to the Marquis of Salisbury. A cell to Holme priory anciently stood near Childwall Hall. The living is a vicarage in the dio. of Chester. Value, £456.* Patron, the Bishop of Chester. The church was repaired in 1853. The rectories of St. Mary, Wavertree, Woolton, and Halewood, the vicarages of Garston, Aigburth, and Grassendale, and the p. curacy of Hale are separate benefices. Dissenting chapels and public schools are in various parts. Markland, the critic, and the Child of Hale, were natives.

Details about the census records, and indexes for Childwall.

The Register Office covering the Childwall area is Liverpool.

"THINGWALL, a hamlet in the parish of Childwall, hundred of West Derby, county Lancaster, 6 miles W. of Liverpool, on the Manchester railway."

In 1835 the parish of Childwall contained the townships of Childwall, Hale, Halewood, Speke, Garston, Allerton, Much Woolton, Little Woolton and Wavertree.

You can see the administrative areas in which Childwall has been placed at times in the past. Select one to see a link to a map of that particular area. 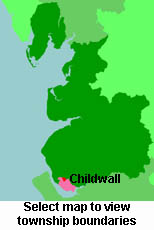 View maps of Childwall and places within its boundaries.