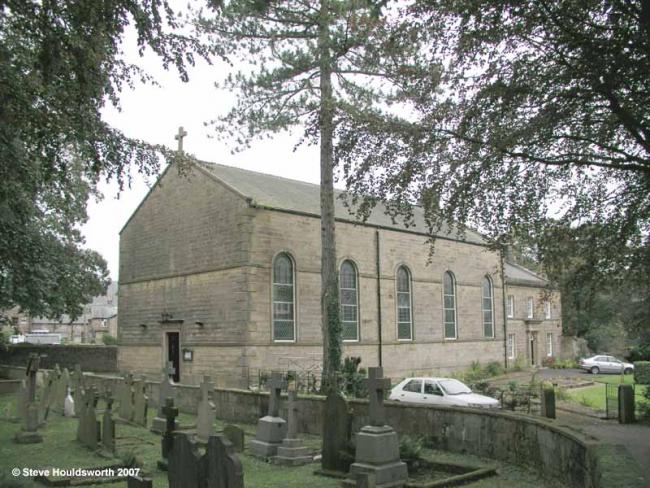 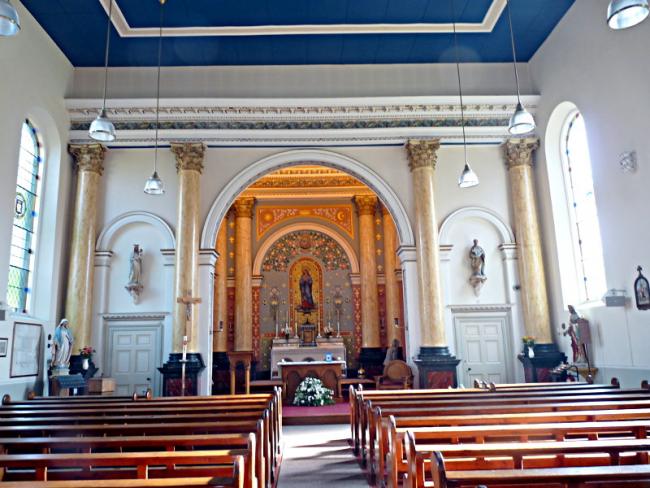 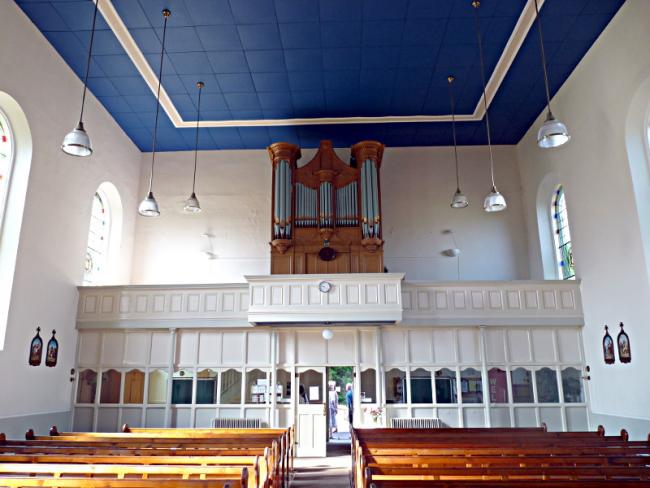 It was founded before 1780 in Leagram Hall. The present church was opened in 1828.

In a remote corner of Lancashire where the fells rise to meet the borders of Yorkshire and the ancient Bolland Forest, there stands the residence of the Shireburne family, Leagram Hall. From the first years of Queen Elizabeth's reign until the nineteenth century Leagram Hall, or the Lawnd as it was called, was a centre where Catholics could hear Mass.

As a refuge for Catholics, Leagram was ideally situated. The squire or his agent could arrange for the tenants on his farms to be for the most part loyal Catholics, and thus Leagram was always surrounded by a large congregation of farming folk who would come to Mass.

Until 1563 the Leagram estate had been royal forest, but at that time Elizabeth gave it to her favourite the Earl of Leicester, who promptly sold it to the Shireburns. Even until recent times the district remained remote from the world. No road led through it, and chains were kept across the road from Chipping and at fords over the river Loud, which bounded the estate on one side.

One of the earliest known priests here was Fr. Richard Penketh, who was resident from 1697 to 1721. In the times of persecution many others must have sheltered in the district. The Shireburnes had another property nearby, the Wolf House, even more remote and hidden in the fells than Leagram. Until recently the Wolf House had been inhabited for nearly two hundred years by the Procter family, who handed down a tradition that there was a priest's hiding place in the kitchen. In fact there used to be shown a deep recess hollowed in a very thick interior wall. An old priest from Ribchester, Father Robert Cottom, probably found refuge here in the reign of Queen Elizabeth.

After the 1715 Jacobite rising, Father Penketh was among those denounced as a priest and recusant. The following evidence is recorded against him:

James Parker the Taller of Lagram sworne this 18 July, 1718, upon his oath says he has known Chipping Lawn and rented the same of Mr. Sherbume and paid 32 10s. per annum and paid the same to his steward. That he knew Mr. Penkard who lived at Chipping Lawn and was reputed a Romish priest.

No doubt Fr. Penketh would have to go into hiding while the Commission lasted. He was buried at Chipping church, where the register mentions: Richard Pencoth a Popish priest, buried 7 August, 1721-of Chippin Lawnd.

Fr. Robert Kendal was priest at Leagram from about 1729 to 1733. He was at Leagram when Bishop Williams made a visita tion in 1729. Fr. Kendal later became chaplain to Lord Molyneux at Croxteth Hall.

Fr. John Moore, a native of Lancashire, was priest at Leagram for a long period, from about 1733 to 1783. After the Jacobite rebellion of 1745, he was sheltered in Preston by a Catholic woman, otherwise he might have shared the fate of Fr. Helme of Lea House, who died in Lancaster gaol. He died in 1783. Fr. James Lawrenson arrived at Leagram three years before the death of Fr. Moore. When Bishop Mathew Gibson made his visitation here in 1784, 42 persons were confirmed and the number of communicants was 120. It is recorded that Fr. Lawrenson kept up the old Catholic custom of the teenlay fire. On the eve of All Souls the Catholics would gather together on the hillside in the darkness; then a bundle of straw held up on a pitchfork was kindled, and while it blazed the people knelt and prayed for the Faithful Departed. Many fires could be seen alight in distant parts of the countryside, showing how many Catholics there were in North Lancashire.

When Fr Lawrenson left for Scorton in 1795, he was followed by a Franciscan, Fr. John Hart. For two years he had to live in a room above Brabin's school at Chipping, while a house was being prepared at Leagram.

From 1800 to 1803 Fr. Hart was assisted by another Franciscan, a native of Chipping only Recently ordained, Father Richard Sumner.

About 1787 a larger chapel, some of which remains, was built by Thomas Weld on the site of the old west wing of the mansion. It was 60 feet long and 25 wide (inside) and had five round-headed windows on the west. A gallery was erected in 1803 to provide more room, and there was an organ at the north end. The building was very plain inside and out; the altar was a table of plain wood with an antependium. The wooden tabernacle was later removed to Chipping.

The main walls of this old chapel are still standing, and it lies at the back of the more modern chapel which the family built. The rounded windows have gone, but the maze of corridors on the ground floor still shows how the approaches to the chapel were guarded. Anyone entering from the back, after advancing a few yards, could either go straight on or turn right or left; the most inviting prospect was, to the left, and that was away from the chapel.

Until 1950 the old altar-stone of Leagram, dating back to the days of persecution, was in its place on the altar of Leagram domestic chapel. Then, because the house is no longer inhabited or the chapel in use, Captain J. Berkeley-Weld gave the present writer permission to remove it lest it should be stolen or damaged by trespassers. It must be one of the oldest altar-stones in the country and is a venerable link with, the Lancashire of penal times. It measures 12" x 8" x 1" and its four corner crosses are linked by lines to make a frame and to disguise what they stand for. The centre cross and the four corner crosses were further disguised by sealing wax, part of which is still visible.

Father John Louis Reeve was priest here from 1803 to 1828. It was, towards the end of his ministry that the present chapel and house for the priest were built in Chipping village itself. The chapel at Leagram now became a domestic oratory for the family in residence. Thus a centuries-old tradition of parish worship at Leagram was broken. It is a pity that there are not more traces left at Leagram of the places where Catholics head Mass in the days of persecution. The present chapel at Leagram dates from more recent times. The very oldest chapel has disappeared, but the site of it was on high grounds at the N.W. end of the courtyard. It was very small and had very thick walls. It was very likely a place where Mass was said in the Middle Ages for the Keeper of the Lawnd.

Priests of the diocese since this time have been: Fr. Peter De Blon, here temporarily from 1857 to 1860 as chaplain at Leagram to learn English; Canon Rimmer from 1860 to 1866; Fr. Isidore De Gryse, a Belgian priest, until 1913, Fr. Thomas Callaway laboured here peacefully for many years until his death in 1940. Since that time the parish has been under the care of Fr. John O'Riordan Browne, M.C., and Fr. Joseph Higham.