CHURCH, or Church-Kirk, a township-chapelry in Whalley parish, Lancashire; on the East Lancashire railway, 1 mile NNW of Accrington. It has a post office under Accrington, and a r. station. Acres, 620. Real property, £13,452; of which £2,000 are in mines, and £659 in quarries. Pop., 4,753. Houses, 873. The property is much subdivided. The inhabitants are chiefly employed in factories. The living is a rectory in the diocese of Manchester. Value, £650.* Patrons, Hulme's Trustees. The church is good. St. Paul's is a new and separate charge. There are three Methodist chapels, a Roman Catholic chapel, and two national schools.

Details about the census records, and indexes for Church Kirk.

The Register Office covering the Church Kirk area is Blackburn.

You can see pictures of Church Kirk which are provided by:

In 1835 Church was a township in the parish of Whalley.

You can see the administrative areas in which Church Kirk has been placed at times in the past. Select one to see a link to a map of that particular area. 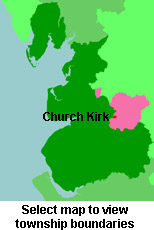 View maps of Church Kirk and places within its boundaries.