CLITHEROE, a town, a township, a chapelry, a sub-district: and a district, in Lancashire. The town stands on the river Ribble, and on the Blackburn and Chatburn railway, at the foot of Pendle hill, adjacent to the boundary with Yorkshire, 10 miles NW of Blackburn. The town occupies a rising-ground; contains many modern houses; and presents the ordinary appearance of a seat of manufacture. It has a post office under Blackburn, a railway station with telegraph, a banking office, three chief inns, a moot-hall, a court-house of 1864, two churches, three dissenting chapels, a Roman Catholic chapel, a cemetery of 1862, a mechanics' institute, and a free grammar-school. St. Mary's church has a fine tower and spire, and occupies the site of a previous edifice. St. James' church is a modern structure, in the Norman style, with a tower. Nearly one-third of the inhabitants are employed in extensive paper-works and four cotton factories. The town is a borough by prescription; is governed by a mayor, 4 aldermen, and 12 councillors; sent two members to parliament from the time of Elizabeth till the act of 1832; and now sends one. The municipal borough is conterminate with Clitheroe township; while the parliamentary borough includes also the townships of Twiston, Downham, Chatburn, Worston, Mearley, Pendleton, Wiswall, Whalley, and Little Mitton, all in the parish of Whalley. Direct taxes in 1857, £4,987. Electors in 1868, 484. Pop. of the p. borough in 1841, 11,324; in 1861, 10,864. Houses, 2,247.

Monumental inscriptions for Clitheroe cemetery, St Mary Magdalene, and for St Michael & St John have been published by the LFH&HS.

Details about the census records, and indexes for Clitheroe.

The Register Office covering the Clitheroe area is Ribble Valley.

Some pictures of Clitheroe.

You can see pictures of Clitheroe which are provided by:

In 1835 Clitheroe was a Township and Chapelry in the Parish of Whalley.

You can see the administrative areas in which Clitheroe has been placed at times in the past. Select one to see a link to a map of that particular area.

The history of Clitheroe from Pigot's Lancashire directory, 1830. 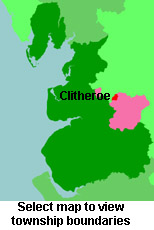 View maps of Clitheroe and places within its boundaries.

Maps of Clitheroe North and South around 1890.

The Workhouse site has an interesting description of Clitheroe workhouse.